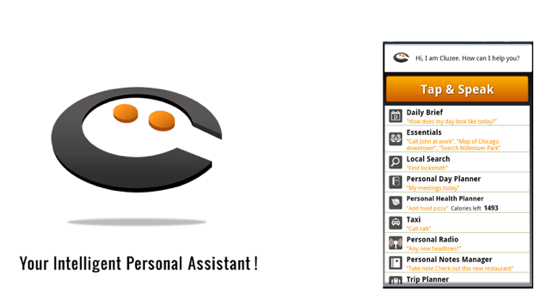 One of the hottest smartphone features right now is Siri, a voice-controlled intelligent assistant available on the iPhone 4S.  There are many voice apps available but they mostly do simple voice-dictation or voice search and Siri is so far the only app that can truly be called an intelligent personal assistant. That will change in time since a lot of developers are trying to come up with a similar app.  The first app to show some promise is Cluzee which is available on the Android platform.  Cluzee could be Siri’s first real competition.

Cluzee converts voice to text to send emails or SMS, reads emails and text messages aloud, pulls down your schedule, gets data from the internet, searches deals depending on the user’s buying habits, researches hotels and flights, finds restaurants based on the user’s personal taste, and more.  This is almost Siri, but it remains to be seen how smooth the app is.

Cluzee is already available for Android phones. Tronton says it will launch a cloud-based version in the future that will be accessible from any phone, tablet, computer or internet-connected device.

Here are a few screenshots of Cluzee app.