This is not a review of the iPhone 4S by any means, though I plan on doing one soon. Although the iPhone 4S is already out in the Philippines, I was check a unit out in Hong Kong where the phone has been available for quite some time now.

The iPhone 4S, as many of you may already know now, is still the iPhone 4 in most respects – same design, same screen, same physical buttons.  What has changed mainly are the processor, the camera and some software features like Siri.  The processor is now dual-core A5 chip, the camera has been bumped to 8 megapixels with a lot of enhancements like the ability to shoot 1080p HD video.  I don’t consider iOS 5 or iCloud as real iPhone 4S features since they are already on iPhone 4 handsets after the iOS 5 update.  So if there’s any advantages of the iPhone 4S over the older iPhone 4, I consider only the processor, the camera, and of course, Siri.

After spending some time with the iPhone 4S, I would say I was not happy with the handset.  This is by no means a conclusive opinion since my experience with the phone was only skin deep. I have not used the phone extensively and in fact I was only confined to the store when I used the handset.  I am an iPhone 4 user running iOS 5 so most of what I saw on the iPhone 4S I already saw or experienced on my iPhone 4.  The iPhone 4S uses a faster dual-core processor but in terms of performance, I did not notice any bump in speed.  For gaming, though, the dual-core chip should deliver a better experience.  The camera, I admit, is better and it handles low-light shots better than the iPhone 4, so I take it as a clear advantage of the iPhone 4S.

Now let’s go to Siri.  Again, I was not able to test this feature extensively as I was just inside the store when I tested it.  The result? Pretty disappointing.  Siri had a hard time taking in what I said, with her answer mostly starting with “I don’t understand…”  I think the noise inside the store might have contributed to Siri’s confusion but in real world situations, you also need to use Siri with a noisy background.  Then again, my experience with Siri was just quick and non-exhaustive so I need to do a hands-on review of this app which is supposed to be the star feature of iPhone 4S.

Overall, I was disappointed with the iPhone 4S.  But remember, this opinion is coming from a user of the iPhone 4, and was formulated not by virtue of a full hands-on review of the iPhone 4S, but a quick check of the device.

If you are a first time iPhone user, the iPhone 4S is of course a compelling choice as you’ll get a good hardware design, a fast processor and a polished operating system in iOS 5.  A good option would be to get an second-hand iPhone 4 which you can of course get at a cheaper price.  As for me, I might have to wait for the iPhone 5. 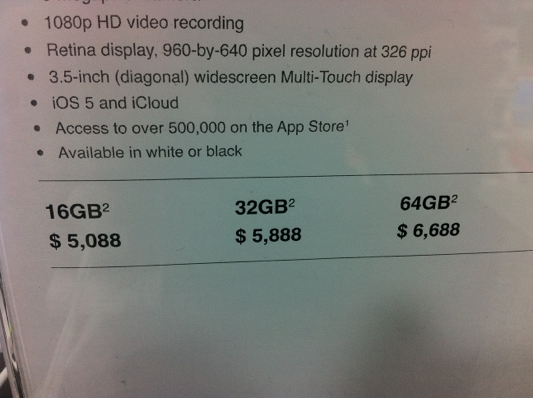