There’s no stopping Samsung from introducing new phones and devices.  The Korean electronics giant just announced a new addition to its Galaxy family, but this time it’s meant for the budget conscious.  Samsung has made the budget Android handset Galaxy Pocket official with a press release.  The Samsung Galaxy Pocket will be one of the cheapest phones in the market, and this is an area Samsung has conquered with its previous budget phones, like the Galaxy Y.

As to specs, it’s what should be expected from a budget phone.  It will pack a 2.8″ QVGA LCD, 832 MHz CPU, 3GB onboard memory, 2 megapixel fixed focus camera, 3.5mm audio jack and the Stereo FM radio with RDS, 3.6 Mbps HSDPA, Wi-Fi b/g/n, Bluetooth and USB.   The memory is expandable up to 32GB via microSD.

The Samsung Galaxy Pocket will run Android 2.3 Gingerbread with TouchWiz interface and will be available later this year in the UK first, and then the rest of the world.  The press release just says affordable price, but if I may make a guess, it should be in the range of $100 (P4,500).

In terms of design, the Samsung Galaxy Pocket has the same appearance as the current crop of Samsung Android phones.  It’s not something exciting or inspired but if you’re on the lookout for a budget phone, maybe you ought to check it out nonetheless. 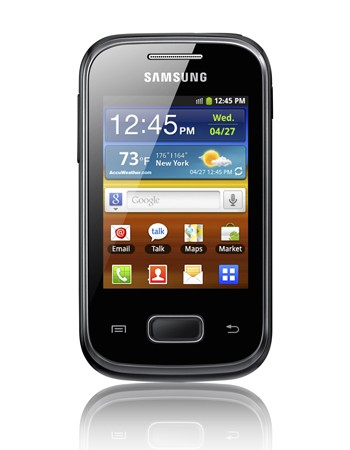