If you own a smartphone, chances are you have downloaded and played Temple Run.  The game is so popular almost anyone I know has played the game either on their own device or on someone else’s device.

Temple Run is a running game.  You play a character that runs from the very start and the gameplay consists of turning and docking and avoiding obstacles the character meets along the way.  But I’m guessing you already know this.

If you’ve gone tired of playing Temple Run, or maybe to you the game simply lost its luster, you’ll be happy to know that the game now has a sequel simply called Temple Run 2.  It’s not an update to the original Temple Run game, it’s a separate game altogether. Temple Run 2 is now available for download on iOS devices.  I have downloaded the game in my iPhone 5 and gave it a spin. Temple Run 2 is still free so you should go ahead and download it now if you’re on iOS.  If you’re using Android, you may have to wait a bit since the game is not yet on the platform. 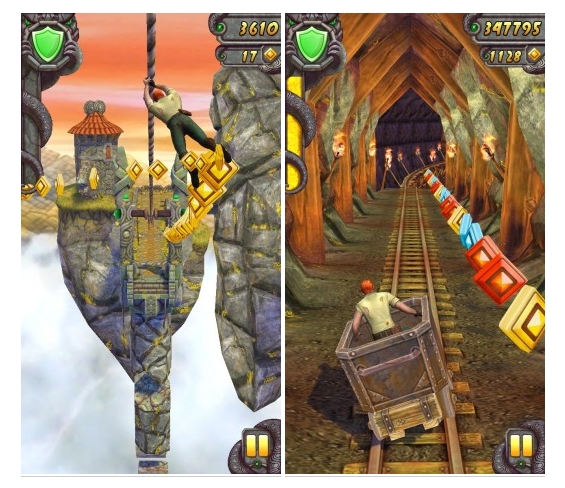 Temple Run 2 is still the same in terms of basic gameplay and in terms of story line. You still swipe left and right to turn and swipe up and down to jump and dock. There are new characters to choose from, but for me, the enjoyment does not come from the characters.  In fact I don’t change characters.  There’s still something running after your character but in Temple Run 2, it’s just one huge monkey instead of several crazy monkeys.

Temple Run 2 has a new location which is a temple in the sky.  In the original Temple Run game, the character simply runs and avoids obstacles. In Temple Run 2, the character holds on to ropes and rides carts in tunnels.  This makes the game more exciting and scarier, and I especially like the parts when the character is supposed to jump and slide along a rope.   The other noticeable thing about the game is that it has better graphics compared to the original game.  It’s simply more fluid and more natural.

Overall it’s still the same Temple Run game but the updates make it worth playing again.  At least until the next update from Imangi Studios. Here’s a video showing the gameplay of Temple Run 2.