The San Diego Comic-Con is always a venue for movies to release trailers to get them noticed.  The two most notable trailer releases at Comic-Con this year belong to the movies Kick-Ass 2 and Riddick. 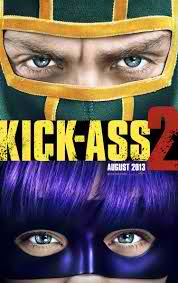 Kick-Ass is a follow up to the surprise hit Kick Ass which featured real-life heroes in masks.  If you’ve seen the first movie, you’ll agree with me when I say it was highly entertaining thanks mainly to the character Hit Girl.  The sequel has an August 16 release date and we’ve seen a trailer of the released previously but at Comic-Con 2013, an extended red band trailer has been released and it’s almost 5 minutes in length. Where the previous trailer failed to show all the collection of villains in detail, the new trailer shows them all and added a few exciting scenes.  Once again, the main attraction of the movie, it appears, is Hit Girl.  Watch the extended Kick-Ass 2 trailer below.

Another movie that is highly-anticipated is the movie Riddick beaing starred in by The Fast & the Furious actor Vin Diesel.  This movie has a September 6 release date but the hype machine has already started churning.  Two previous trailers for Riddick have been released and this new one is the longest by far.  Here’s the story line for Riddick:

The infamous Riddick has been left for dead on a sun-scorched planet that appears to be lifeless. Soon, however, he finds himself fighting for survival against alien predators more lethal than any human he’s encountered. The only way off is for Riddick to activate an emergency beacon and alert mercenaries who rapidly descend to the planet in search of their bounty.

The first ship to arrive carries a new breed of merc, more lethal and violent, while the second is captained by a man whose pursuit of Riddick is more personal. With time running out and a storm on the horizon that no one could survive, his hunters won’t leave the planet without Riddick’s head as their trophy.

And here is the extended trailer.