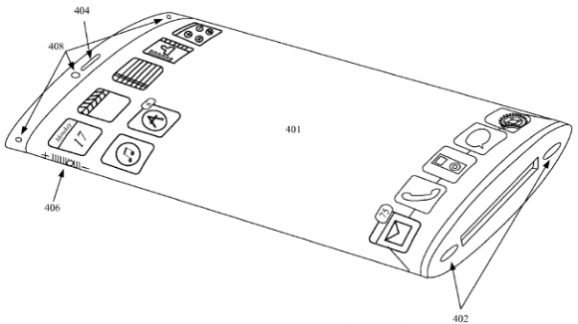 Apple was granted a patent for a wraparound display concept, giving us a glimpse of a possible future version of the iPhone. Originally filed in 2011, the patent first surfaced in March 2013.

The images from the patent show a curved iPhone with a wraparound display, dropping the bezels and giving it extra room for five apps per row. The display could be made with a flexible AMOLED, and most likely will be covered with a layer of curved glass (sapphire crystal?).  The physical buttons (home, volume, possible the one for locking the phone) were removed, and replaced with virtual buttons.

The hypothetical iPhone can also make use of multiple cameras for facial recognition. This can theoretically allow the device to follow the user’s face, and make adjustments on the visual display accordingly.

The concept of a wraparound display is actually very interesting. Everything is virtual, no physical buttons, effectively larger display since its wraparound, etc. I can foresee some problems people would face if this becomes true (smudged screen all-around, battery life, breaking glass). Maybe Apple could be the one company who can pull this off. And if this doesn’t happen, Apple has yet another weapon to use in its patent war.

What do you guys think? Yea or nay?