The Huawei Mate 20 and the Mate 20 Pro are set to debut at a big event in London. These flagships are one of the year’s most anticipated devices, bringing with it the Kirin 980, the company’s latest processor.

With just a day or so away before the Mate 20 Pro’s big unveiling, a huge leak is posted online, baring press renders, specs details and pricing.

As previously announced, the Mate 20 Pro is expected to be the first Huawei phone to use the HiSilicon Kirin 980 processor. It will be paired with 6GB/8GB RAM and 128GB/256GB UFS 2.1 storage options.

The device will front a 6.39-inch quad HD display with a 19.5:9 aspect ratio and a 3120 x 1440 resolution. It has a big notch which houses the 24MP front camera and a new Vertical Surface Emitting Laser module for face recognition ala iPhone XS. 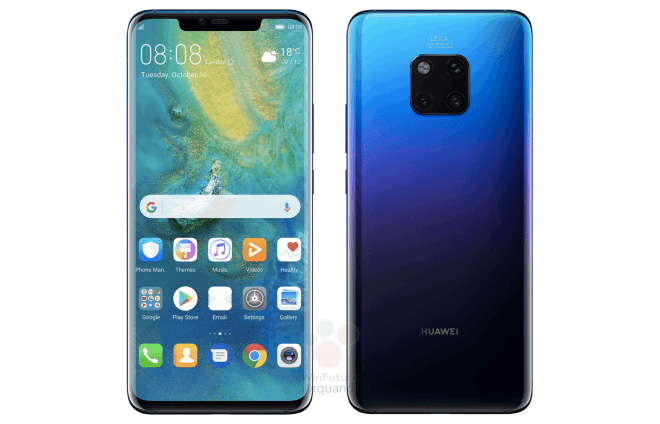 The phone will come with triple rear cameras in a square arrangement. The 40MP primary sensor will come with an f/1.8 aperture lens and a new Light Fusion tech. According to the leak, it combines four pixels into one and results in an improved image quality.

The 20MP sensor has an f/2.2 aperture and a telephoto view, and the third 8MP sensor provides an ultra wide-angle view.

Interestingly, the Mate 20 Pro will be introduced with a new proprietary Nano Memory Card. It will have a capacity of up to 256GB. It will be as fast as regular MicroSD cards, but in a smaller format. 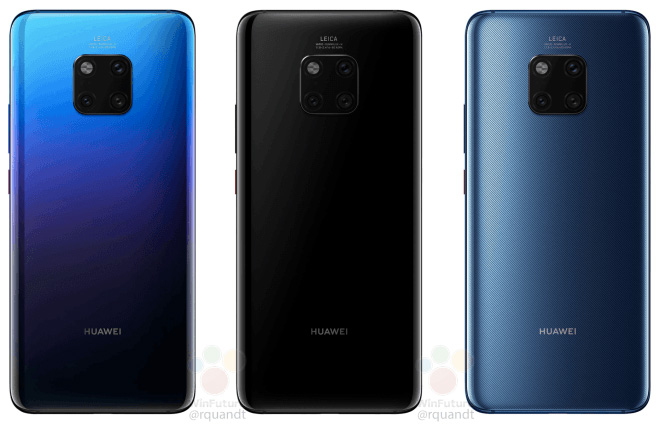 As for the battery, the Mate 20 Pro will sport a 4,200 mAh battery with SuperCharge fast charging. It is claimed to go from zero to 70% in just 30 minutes. The phone also supports wireless charging with a reverse wireless charging feature. Theoretically, it can charge other wireless devices.

Other interesting specs include Bluetooth v5.0, stereo speakers, and IP68 water and dust resistance. It will run on EMUI 9.0 based on Android 9.0 Pie.