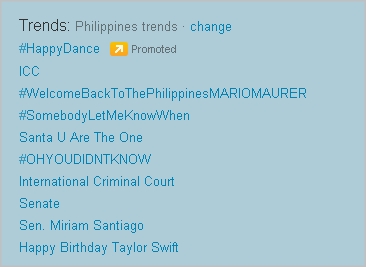 ICC is an independent court that tries persons accused of the most serious crimes of international concern like genocide and crimes against humanity.  The current selection involved six seats and Sen. Miriam Santiago topped the candidates in terms of numbers of votes garnered.

The Department of Foreign Affairs said that in order to be elected, a candidate must receive two-thirds majority of the total number of votes cast.  Sen. Miriam Santiago’s appointment is historic as she is the first woman from an Asian developing state to hold the position in the ICC which is based in The Netherlands. 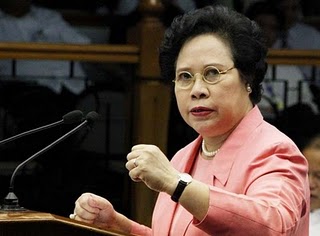 In October of this year, Se. Miriam Santiago was quoted as saying that she would be resigning from the Senate should she win a seat in the ICC.  “I’ll have to resign [as senator]. Isn’t that good news for my enemies? I would have to live inThe Hague. I will look like a European and speak like a European and I will be as snooty as a European when I come back”, she said.

I wonder if she’ll continue to craft witty pick-up lines while she’s with the ICC.