Just like the Marshall Major, the packaging of the Marshall Minor is something that really stands out.  It’s not your usual fancy packaging but there’s no mistaking the amount of creativity that went into crafting the design.  The box is square and brown-colored, something that works in giving the whole package a retro feel.  What you see on the outside are white prints, fitting for the color of the headphones inside. 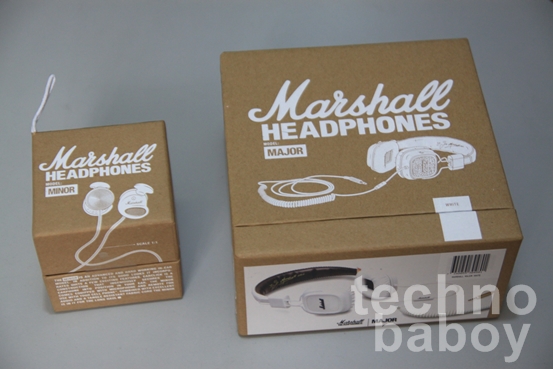 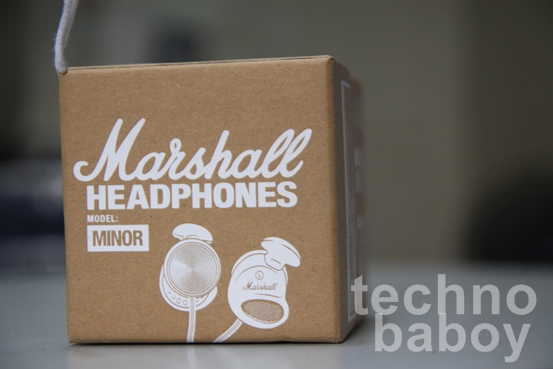 Opening the box is like opening a piece of jewelry.  You flip the top open and you suddenly see the headphones spring forward.  The Marshall Minor of course sits comfortably on at the center and is securely held to the base by plastic cables. 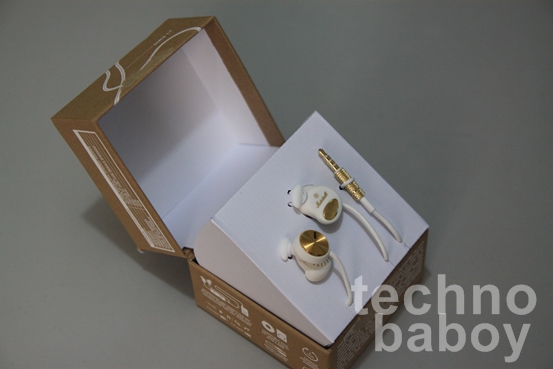 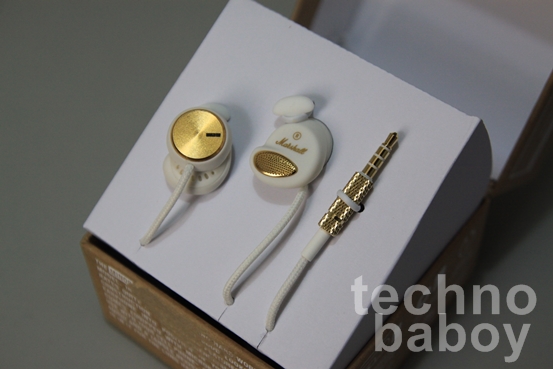 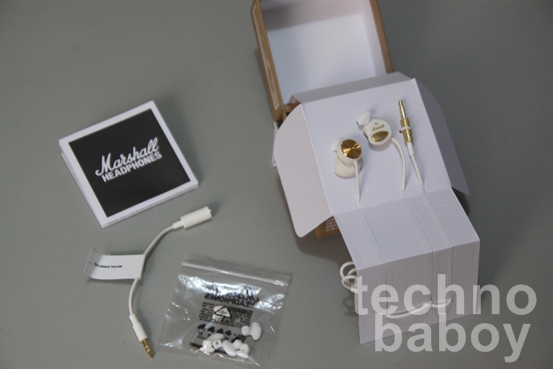 Let’s now go to the design of the Marshall Minor headphones.

In a word, the Marshall Minor is different.  We see a lot of uniquely designed headphones but almost always we immediately know how they are supposed to be worn.  It’s not the case with the Marshall Minor.  It has quite an odd shape.  The outside part that mostly protrudes in canal earphones or in-ear monitors is flat on the Minor and covered with a shiny bronze finish.  The inner part flows downwards, and you see gold-covered piercings, which you will immediately recognize as the sound vent.  Marshall claims that the Minor is an in-ear monitor but it’s actually not.  Despite the odd shape, the Minor can still be classified as conventional canal type headphones. 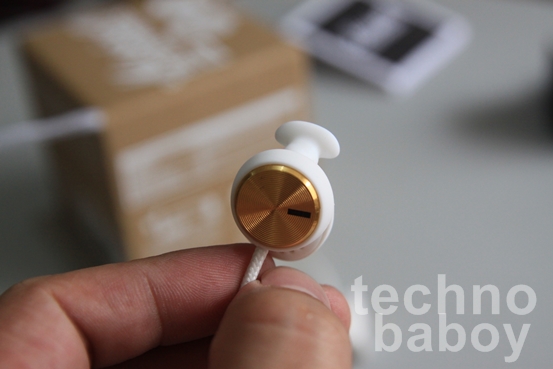 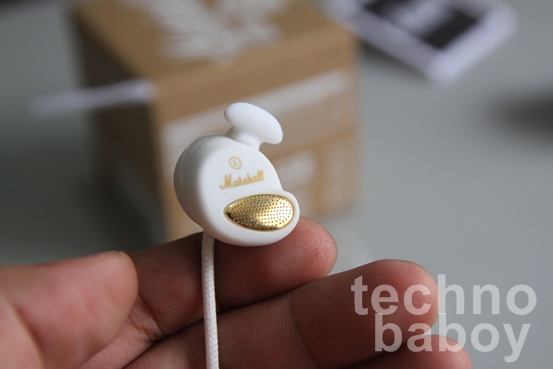 What’s confusing are the fan-shaped little pads that are positioned on top of the earbuds.  A little probing will lead you to a realization that the weird pads are meant to be inserted to the canal just above the earlobe. The pads act as locks that hold the earbuds firmly on the ears.  This is quite an innovative design but apparently this is not the first time this design has been used on headphones.  This same style was first seen on the Urbanears Medis.  The design is what Marshall calls the EarClick System and the Minor comes with four sets of interchangeable EarClick pads, one of which is already pre-mounted on the earbuds.  You choose the best set that fits you but I noticed that the size that offers the perfect fit causes strain on the upper ear canal, while the size that offers comfortable fit is a little loose. 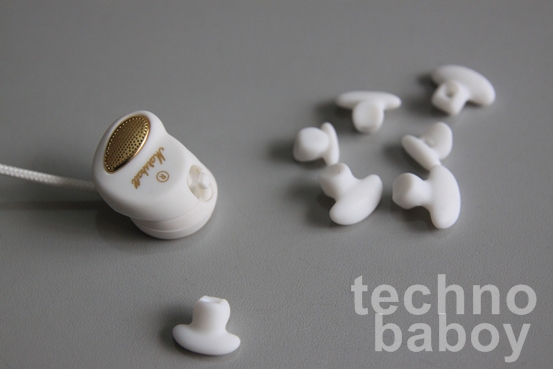 The Marshall Minor tries to borrow from the design of Marshall amplifiers.  It uses bronze and gold accents and these are quite prominent on the back of the earbuds and the cable plug.  But unlike the Major, the design of the Minor does not immediately remind you of the famous amplifiers.  In other words, the Minor is not distinctly Marshall.

The build of the Marshall Minor is quite solid and the tangle resistant fabric cord is strong and sturdy.  What I don’t like is the white rubberized plastic used on the earbuds as they somehow feel cheap.

The Marshall Minor has mic and remote for use on cellphones using the 3.5mm standard.  The button is located a few inches below the left earbud and can be used to control calls and to play music.

I was fairly impressed with the Major on-ear cans and I was also expecting something as good with the Marshall Minor.  Sadly, the Minor isn’t as good.  If I may describe its sound signature, it’s rounded but lacking in oomph and intensity.  I always look for bass response on headphones so I was naturally judging the Minor initially on this basis.  I find the bass on the Minor a simply lacking in impact.  It’s a little flat at times and lacked the warmth I so liked abut the Major.  Expect the Minor therefore to falter in tracks that have strong, thumping bass.  On tracks like Black Eyed Peas’ I Gotta Feeling and 50 Cent’s In Da Club, you will feel the inadequacy of the Minor in delivering bass lines that you would otherwise hear differently on other headphones. 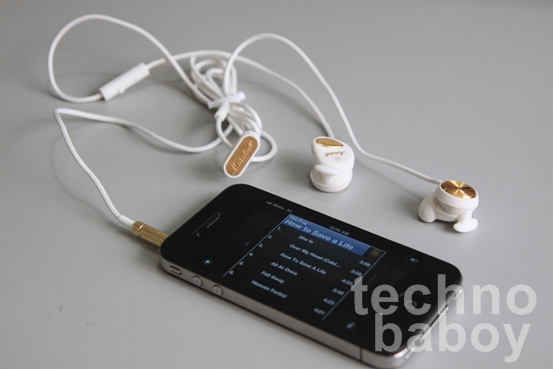 The Marshall Minor isn’t all that bad though.  It in fact excels in delivering mids.  On tracks that do not require too much bass power, the Minor is actually good. I admire how it sounds on alternative tracks and in fact, it performed well on guitar-laden tracks like Lenny Kravitz’s Are You Gonna Go My Way.  I also like the treble quality on the Minor as it manages to sound good on mellow tunes with strong vocals. I tried playing tunes from Coldplay and from Snow Patrol and I liked what I heard.

On highs, the Minor is mediocre.  It simply doesn’t shine on this department.  High frequency elements somehow break towards the end and this is noticeable at high volume.  I  find it piercing and harsh. Sound stage also isn’t one of the strong suits of the Marshall Minor.  You don’t hear music the way it’s supposed to sound on stage or in the studio.  Sound isolation is also not ideal,although for this type of headphones, it’s not that bad.  On high volume, it sufficiently drowns out outside noise.

The Marshall Minor has a lot to prove considering that it carries the prestige and reputation of the Marshall name.  The Marshall Major I previously reviewed passed the test, barely if I may add, but the Minor sadly failed.

The sound signature of the Marshall Minor is round but it’s flat on bass response.  It’ not ideal for bass-heavy tracks like R&B or hip-hop.  I do recommend this though to those who listen mostly to alternative or mellow tracks as it manages to sound good on these types of music.  It also delivers admirable mids so it performs well on guitar-laden and vocals-heavy tracks.

For the price of P2,950, what the Marshall Minor delivers is decent sound in a fashionable yet quirky design.  For those who value design over sound quality, the Marshall Minor is definitely worth considering.  If you’re looking for something that delivers good overall sound performance, you may have to look somewhere else.

You can get the Marshall Minor headphones at these stores: 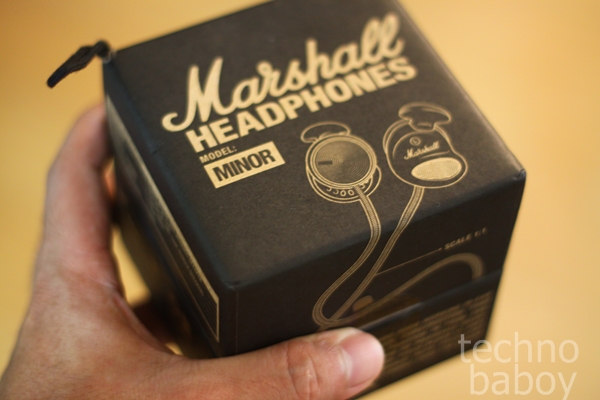 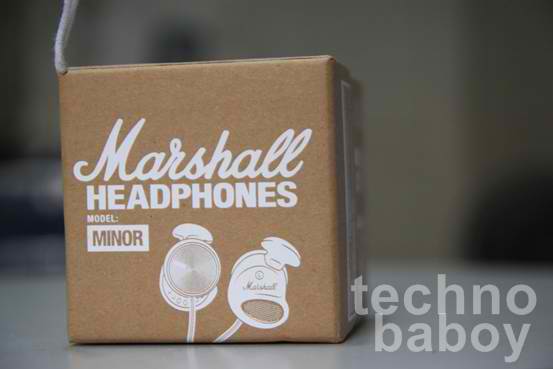