Everyone was expecting Nokia to be the first to unveil a Windows Phone 8 handset.  After all, it’s close to Microsoft and it has been deep into the Windows Phone system with its Lumia series of handsets. Samsung naturally surprised a lot of people when it unveiled the ATIV S handset at the ongoing IFA 2012 event in Berlin.  Nokia’s Windows Phone 8 handsets are expected to be unveiled in a few days anyway but still, it’s something when you do it first.

The Samsung ATIV S phone is different in terms of design.  It doesn’t look like Samsung’s Android handsets. It has a distinct look that’s actually quite refreshing. It is notably thin, coming at only 8.7mm thick.  The ATIV S is coated with brushed aluminium and the Gorilla Glass-reinforced screen curves at the edges. Unlike other Windows Phone handsets, Samsung chose a physical Windows button for the ATIV S.  This is similar to what we see in Samsung’s Android devices like the Galaxy Note II and Galaxy S III. 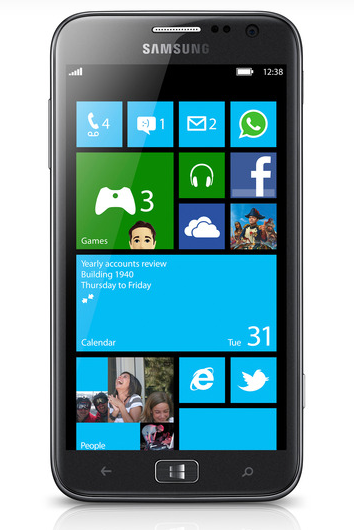 The hardware specs are quite good.  The ATIV S features a 4.8-inch HD Super AMOLED display, a 1.5GHz dual-core processor, 1GB of RAM, a 2300mAh battery, an 8-megapixel rear camera and a 1.9-megapixel front-facing camera. Storage options are 16GB and 32GB model. Whichever you choose, you have the option of expanding your storage via via microSD.

Pricing and availability of the Samsung ATIV S are still unknown at this point.  The handset will likely be released in the Philippines October.