Google touts that the Nexus 10 marries Samsung’s best-in-class hardware, the latest version of Android-4.2 Jelly Bean, and the best of Google.  The Nexus 10’s display is said to be the world’s highest resolution tablet display.  It packs a 2,560 x 1,600 display with a pixel density of 300ppi.  The rest of the official specifications include a dual-core, Cortex A15-based 1.7 GHz Samsung Exynos 5250 CP, a Mali T604 GPU, 2GB of RAM, NFC, 802.11 b/g/n (MIMO + HT40) WiFi, Bluetooth 4.0, stereo speakers and front-and rear NFC (Android beam) radios.  The Nexus 10 also packs a 5-megapixel rear camera and a 1.9-megapixel front shooter.  The tablet also offers a microUSB slot, a Pogo Pin, a microHDMI slot and a 3.5mm headphone jack. 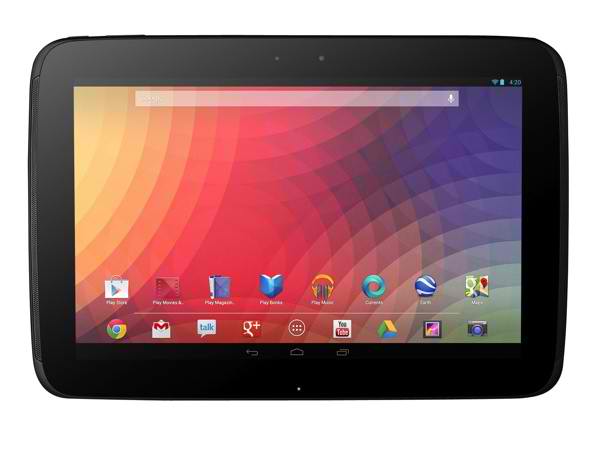 To complement for the power-hungry display, Google used a 9,000mAh battery which should be good for 9 hours of continuous video playback and 500 hours of standby.  That’s quite a lot of juice for a 10-inch tablet.