There were a lot of things that transpired at the recent BlackBerry event.  Apart from being the official launch of the BlackBerry 10 OS, the event was also used to introduce two new handsets – the BlackBerry Z10 and the BlackBerry Q10.  It was also announced that the company known as Research in Motion (RIM) is no longer called that as it now changed the name to just BlackBerry.  So from now on, BlackBerry doesn’t just refer to the handsets, it refers to the company as well.  As to the new handsets, there was nothing surprising about these new devices.  A lot of leaks and teasers about the handsets have preceded the announcement so the launch was nothing but a formality in my opinion.

The first handset is the BlackBerry Z10, a full touchscreen device without physical buttons in front, not even for home or menu.  It is quite similar to the handsets handed out to app developers.  The main hardware specs for the Z10 aren’t industry-leading, but the handset looks formidable nonetheless.  The BlackBerry Z10 packs a 4.2-inch 1280 x 768 display (356 ppi), a 1.5GHz dual-core Snapdragon S4 Plus processor, 2GB of RAM, an 8-megapixel rear camera, a 2-megapixel front camera, a removable 1,800mAh battery and a microSD slot.  For connectivity features, the BlackBerry Z10 has NFC, WiFi a/b/g/n, Bluetooth 4.0 and LTE.  It also has micro-USB and micro-HDMI slots and a 3.5mm headphone jack.  The BlackBerry Z10 of course runs the new BlackBerry 10 OS.

The BlackBerry Z10 is a good looking handset.  It’s honestly a breath of fresh air, especially if you’re tired of seeing designs from Apple and Samsung.  The Z10 is thin but not thinner than the iPhone 5 or the Samsung Galaxy S III.  It measures 9.3mm thick, which makes it a bit thicker than these devices.   It only weighs 138 grams, however, so it should not be too much to carry around.  Here’s the promo video for the BlackBerry Z10. 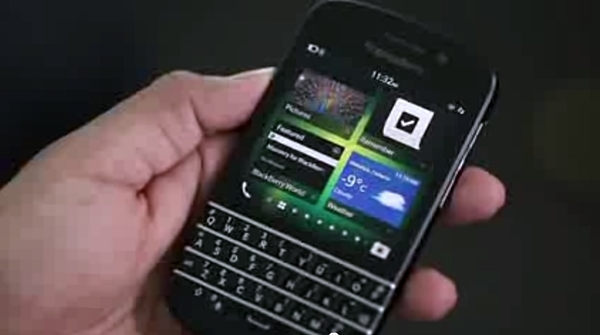 The BlackBerry Q10 has a 3.1-inch AMOLED touchscreen, a 1.5GHz dual-core processor, 2GB of RAM and LTE.  It boasts of an edge-to-edge glass screen, a three-dimensional glass weave structure and a large-capacity battery.

Here’s the promo video for the BalckBerry Q10.