Samsung has officially announced the schedule for the unveiling of the next Android flagship phone.  In an event called Unpacked, Samsung will show to the public the Galaxy S IV.  The date for the event is March 14 and the venue is New York.  That’s only a few days away so for Samsung fans, the wait is almost over.  The next Galaxy S phone hopefully will be another phone with high end specs, and you know Samsung that well,  the Galaxy S IV would probably turn out to be another monster of a phone.  The new handset should improve a lot on the Galaxy S III if Samsung is to retain its hold on the smartphone market.  In the past months smartphones from other makers have been unveiled and they are getting more and more impressive, design and hardware-wise.

Mark March 14 if you want to be the first to know about the Samsung Galaxy S IV. Here is the official invite from Samsung for the event. 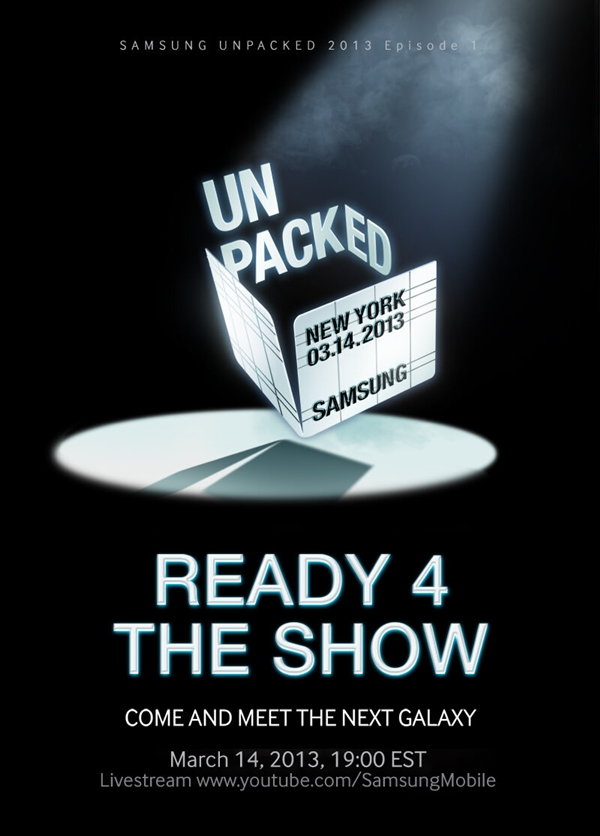 As to specs for the Samsung Galaxy S IV, rumors are strong that it will pack a 4.99-inch 1080p full-HD SoLux display, a 1.9GHz Qualcomm Snapdragon 600 quad-core processor and a 13-megapixel camera.  So that means that Samsung will not be using its own Exynos processor and will also not be using an AMOLED display.  Other rumored specs include 2GB of RAM, 16, 32, and 64GB of internal storage.  As to design, some rumors point to essentially the same elements like a physical home button, a plastic back cover and silver strips on the side.

So far, these are all rumors so you should take them with a grain of salt.  Samsung has been quite effective in keeping the lid on its new products.  The Galaxy S III did not come out until it was officially launched and it’s expected that Samsung will employ the same tactics to keep the secret out of the prying public.

Are you excited to see the Samsung Galaxy S IV? Do you think it will be another beast of a phone just like the Galaxy S III? Share your thoughts.