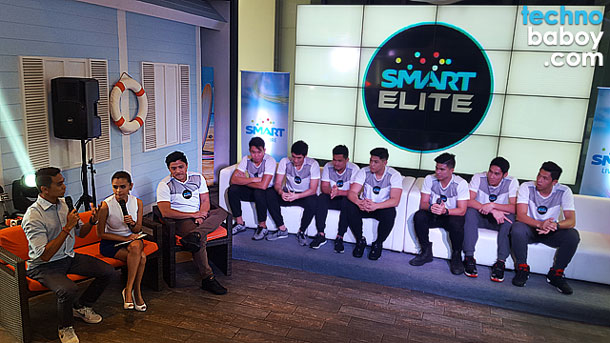 Smart Communications has just revealed its second batch of sports ambassadors. The athletes are basketball players from different schools of the University Athletic Association of the Philippines (UAAP). The event, attended by select bloggers and members of the media, was held at the Caliburger in Century City Mall, Makati.

“We encourage young Filipinos to take inspiration from these athletes who have displayed outstanding basketball skills and fierce passion for the sport. We support the Smart Elite as they continue to live more by pursuing their passion, in the same way they we are enabling millions of Filipinos to fully enjoy their passions – be it music, films, urban living or sports – through meaningful innovations. This is what the Smart Life is all about,” said Smart EVP and consumer business head Ariel P. Fermin.

Smart is a major supporter of sports development in the Philippines. It supports the UAAP, Gilas Pilipinas, Sinag Pilipinas and the Askals. It’s chairman Manny V. Pangilinan is know as one of the countries foremost sports patron.

The 78th season of the UAAP begins on September 5.