The Samsung Galaxy Note 9 got a DxOMark score of 103. The flagship shares the number 2 spot with the HTC U12+.

Camera testing site DxOMark finally revealed the score of the Samsung Galaxy Note 9. The handset managed to get 103 points, edging the Huawei P20 and the Galaxy S9 Plus. It is tied with the HTC U12+ at the second spot. The Huawei P20 Pro is still at number 1 with 109 points. 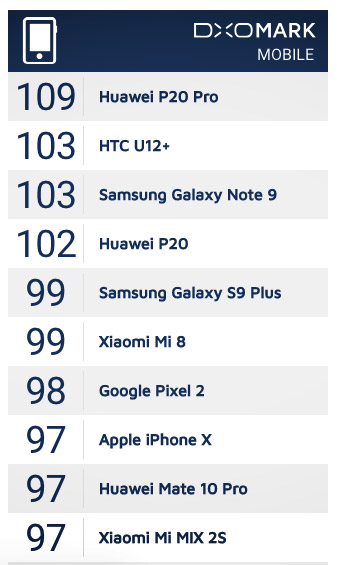 The Galaxy Note 9 was praised for its autofocus speed and accuracy, wide dynamic range, zoom performance, and pleasant and vivid colors. Good balance between detail retention and noise reduction was also noted by the reviewers.

Compared to other phones

In case you’re choosing handsets based on camera quality, you’ll be surprised to know that the Note 9, the HTC U12+, and the Huawei P20 have scores close to each other. As you can see on the comparison table below, the differences are small and probably due to the nuances of each criteria under the Photo and Video category. This also explains the Note 9 and P20 having different total scores despite having the same photo and video score.

The table also shows how big the gap is from the Huawei P20 Pro, compared to the rest of the pack.

For more information about the phones’ scores and how they got it, you can check out the source link at the end of this post.

As for the rest of the specs, the Note 9 also has an Iris Scanner, a Fingerprint Sensor, Facial Recognition, a USB Type-C port, IP68 rating, a 4,000 mAh battery, and Samsung Experience UI on top of Android 8.1 Oreo.