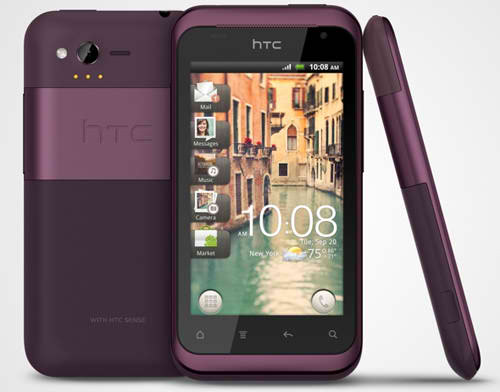 HTC has made the HTC Bliss official but decided to launch the same as the HTC Rhyme.  This new handset is aimed at female users, although HTC does not explicitly state so. The Rhyme will be initially available on the Verizon network in the US, but it is expected that this HTC handset will also be launched in other countries.

There’s nothing really special with the HTC Rhyme, apart from the fact that it is obviously styled for the ladies.  The HTC Rhyme uses a 1GHz Qualcomm Snapdragon S2 (MSM8655) CPU and packs a 3.7-inch WVGA Super LCD display.  It has a 768MB RAM, 5-megapixel rear camera and VGA front camera and runs Android 2.3 with the new Sense 3.5 overlay.

What makes the HTC Rhyme different is the inclusion of a LED charm which lights up whenever a call or a text message is received.  It is plugged into the Rhyme’s 3.5mm headphone jack and is supposed to help the user to get easily notified even if the phone is stashed inside a bag.  The HTC Rhyme is bundled with a set of headphones and alarm dock.

The HTC Rhyme will be available on Verizon in the US starting September 22nd and is expected to launch in other parts of the world including Asia in October.  There’s no word yet on pricing but it’s available for $199.99 on Verizon with contract.