The HTC ChaCha is being marketed as a “Facebook phone” because of its heavy integration with the social networking platform.  You can easily say it’s a gift from HTC to millions of Facebook users, but in reality, it is an attempt by the Taiwanese phone maker to tap potential income from the huge Facebook community.  The Philippines is known as the social networking capital of the world so Filipinos have naturally taken interest over this phone.   Read on to find out if the HTC ChaCha is the next phone you should be owning. 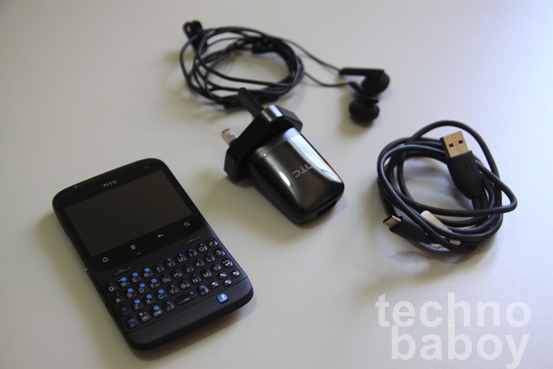 The HTC ChaCha is a deviation from the usual touch screen phones that we see from HTC.  HTC made a name with its portrait-oriented handsets but the ChaCha is different.  It has a QWERTY keyboard and a small 2.6-inch screen that features a landscape orientation.  As such, the HTC ChaCha enters the BlackBerry territory and other QWERTY Android phones with its form factor.  Compared with the typical BlackBerry though, the HTC ChaCha is wider and a bit thinner.  Below is a BlackBerry Bold 9700 beside the ChaCha. 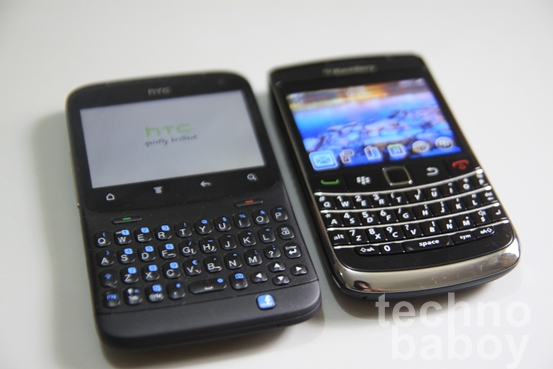 But HTC has obviously distinguished itself from BlackBerry handsets and Android QWERTY phones with its impressive finish.  The HTC ChaCha feels premium.  This is the first thing that immediately came to mind the first time I held it.  It has a very, very solid construction, without any hint of flex anywhere in the phone.  The solid construction is characteristic of HTC handsets and its good that the ChaCha got the same treatment from HTC. 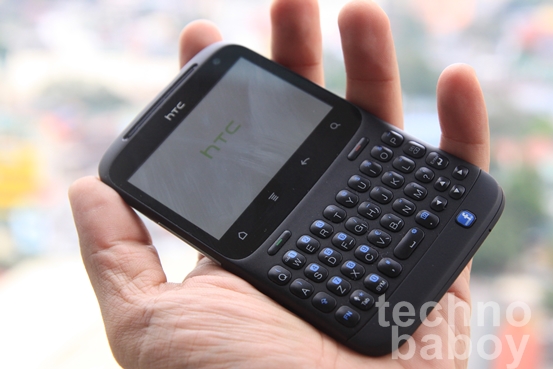 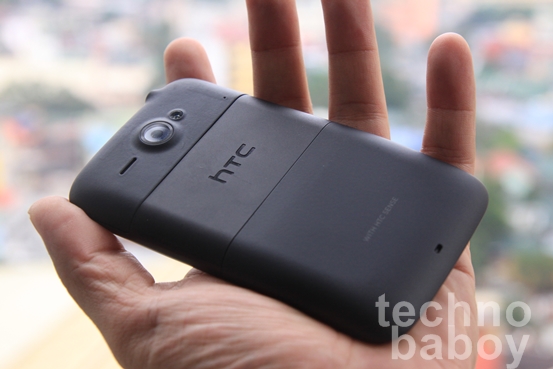 The screen on the HTC ChaCha is small at 2.6-inches, but what the handset lacks in size it more than makes up for in quality.  The screen has 480×320 HVGA resolution and on 2.6-inch phone.  This kind of resolution translates to very fine details.  As a result, everything is simply rendered clearly on the HTC ChaCha.  I also like that the screen is vibrant and delivers accurate colors and hues, not to mention good viewing angles.  The display of course is the touch screen type and you can swipe and pinch just like in bigger touchscreen displays.  Screen response is very good, only that the icons are smaller than the regular size owing to the different UI, so it is sometimes annoying to operate. But still, if you are going the QWERTY route, it is better if you get a touchscreen phone like the ChaCha.

But the best hardware feature of the HTC ChaCha has to be the QWERTY keyboard.  Of all QWERTY phones I’ve tried, the ChaCha possibly has the best QWERTY keyboard to operate.  The size of the keys is great, with just the right amount of space in between, and the layout is also perfect.  HTC was even able to squeeze in a directional keypad in there.  It is also a delight to type on the ChaCha as the keys have very nice tactile feedback.

For ports an buttons, you get the usual ones.  Above the QWERTY keypad are the call and an end button and above these buttons are four touch sensitive Home, Menu, Back and Search shortcuts.  The dedicated Facebook button, meanwhile, is positioned at the lower right corner of the phone.  On the left side of the HTC ChaCha is the volume rocker and microUSB port and on top are the power button and the headphone jack.  At the back is the 5MP camera, LED flash and loud-speaker.

Overall, the hardware on the HTC ChaCha is a good combination of sophistication and functionality.  It belies the fact that it is just a mid-range phone in HTC’s current lineup.

The OS running on the HTC ChaCha is Android 2.3.3 Gingerbread with HTC’s proprietary Sens UI but the version installed is called “Sense 2.1 for Messenger”.   This version of Sense is possibly specific for versions with landscape orientation since it is already version 3.5 for portrait phones.  In any case, Sense 2.1 is very much different from 3.0 or 3.5 and HTC changed a lot to the appearance of Sense UI to make it fit in landscape mode. 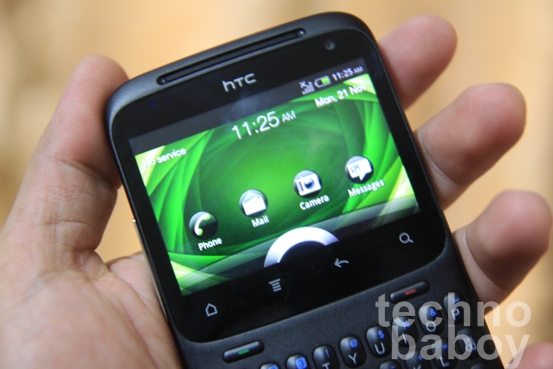 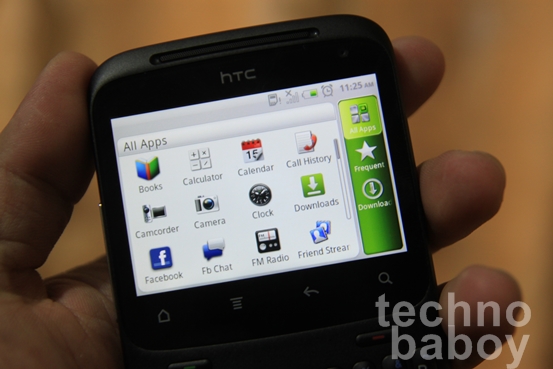 On the home screen there’s the usual lock ring but once you unlock the phone, you see the HTC clock on top-center with the social feeds below it, and a few icons to the left and right.  On the bottom left is the shortcut to the App drawer and on the bottom right is the shortcut for personalization options.  If you’re used to operating big displays, looking into the display of the ChaCha is like being transported to Lilliputing since everything suddenly feels small and cramped.  It takes a while before you get used to the smaller icons and landscape orientation.

Sense 2.1 still has the homescreen shortcuts, which can be up to a maximum of seven.  The drop-down notifications bar is however different as you won’t see the usual quick settings shortcuts, just the usual Android notifications.  It is also unfortunate that most of the standard apps and menus won’t rotate into portrait orientation.

Facebook chat is also quicker to start and manage on the ChaCha.  The QWERTY keyboard is arguably the best way to type messages so it complements the Facebook  chat app very well.  For Facebook Chat, there is a widget on the homescreen with all available contacts so it’s very convenient to do chats with Facebook friends.  I should mention here, however, that the screen is insufficient for reading updates since only a few lines are shown at a time.  But if you can get past the tiny screen, using Facebook on the ChaCha should be a satisfying experience.

One of the better features of HTC phones is the camera.  On the HTC ChaCha, though, the camera’s performance is quite disappointing.  It’s not bad by any means but after having the chance to use the cameras on a handful of HTC phones, I quickly noticed that the camera on the ChaCha is not as good.   I don’t particularly like how the ChaCha’s camera reproduces colors.  Some hues are poorly rendered. The contrast on photos also seem lacking so shots come out quite bland.  If there’s any other thing I noticed, it’s how poorly the ChaCha’s camera handles strong contrast subjects.  But this one could easily be a problem on any camera so I won’t take it against the ChaCha.   For your daily shooting needs and for easy sharing on Facebook, the ChaCha’s camera will suffice but don’t expect miracles with it.  The shots may look good on the phone’s screen but once you view them on your computer or on any other bigger display, you’ll see how bland the shots are. Here are a few sample photos I took with the ChaCha. 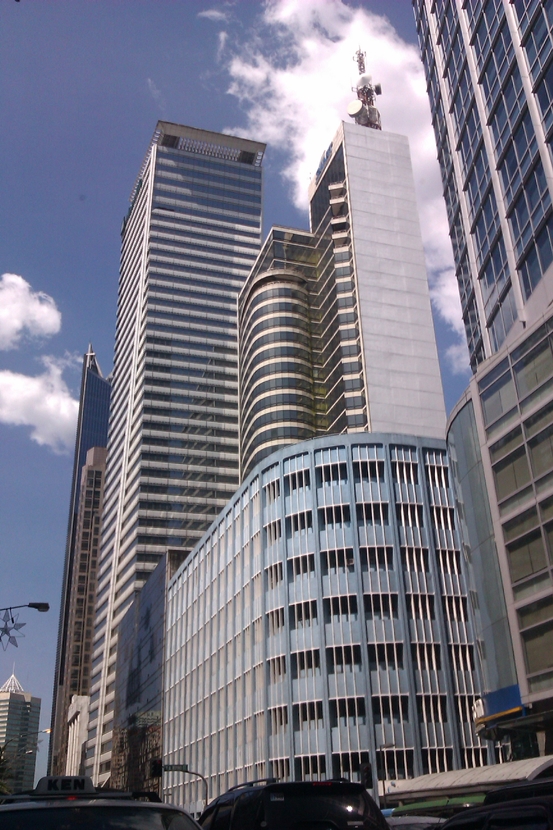 As to video shooting, don’t expect much from the ChaCha either.  The video quality is definitely not stellar but it’s still passable.  Sharpness is acceptable but I noticed though that videos taken with the ChaCha are not smooth.  You’ll easily notice this when you shot moving subjects.   Here is a sample video.

The HTC ChaCha is actually fast considering that it has an 800MHz CPU running underneath.  The 512MB RAM is also more than sufficient for operating the most common features of the phone.   Apps are fine to operate and transitions are visibly smooth.  In terms of calling features, the ChaCha delivers clear calls and it also has good reception.

Battery life is more than sufficient in my opinion.  I was able to get about one day and a half in a single charge with normal use. Normal use includes, calls, sending SMS, operating apps and browsing using Wi-Fi connection.  You’ll get more juice from the ChaCha if you put the phone mostly on standby.

The HTC ChaCha is a unique phone.  The styling is uncommon, especially for an HTC phone, but if you get past that, you’ll realize there’s more to this phone beyond its unusual looks.

The ChaCha has very good hardware design.  It’s tough, excellently made, and offers one of the best QWERTY keyboards on any handset — BlackBerry phones, Nokias and QWERTY Android phones included.  The keyboard complements the phone’s Facebook integration and is simply perfect for those who expect to do a lot of chatting and messaging on the handset.

The display of the ChaCha is also great — it’s very sharp, very vibrant and has good touch response.  However, despite the good screen quality, the size of the display could be a deal breaker to some.   The 2.6-inch screen just feels insufficient when operating the phone and I see people with big thumbs having problems with the ChaCha’s screen.   If you don’t find the small screen size an issue, the HTC ChaCha is a great phone to own.