Samsung already released the pricing for the new Galaxy Y Duos handset.  This new Android handset was announced last December together with the Galaxy Y Duos Pro but it will soon be available in the Philippines. 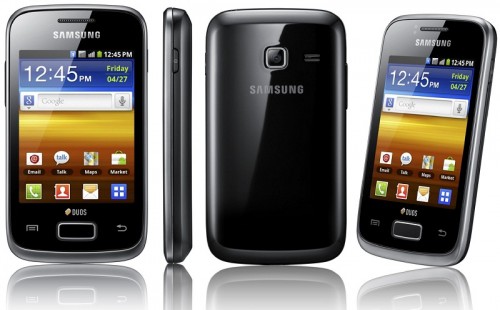 Here are the complete specs of the Samsung Galaxy Y Duos.

The biggest addition is the dual-SIM functionality, a feature that’s becoming a necessity nowadays.  The bigger 3 megapixel camera should also perform better than the 2 megapixel sensor on the original Galaxy Y.   The design has also been changed a bit, with the most noticeable change being the back cover.  While the previous model sported a silver back, the new one has a glossy back cover.

Samsung is going to sell the Galaxy Y Duos at a higher price.  The Galaxy Y retails for P5,990 while the Samsung Galaxy Duos will retail for P8,990, or a difference of P3,000.  Admittedly, the specs and features of the Galaxy Y duos are better.  Does the improved specs justify the increase in price?  This should be answered in my upcoming hands-on review.  Do watch out for that.

According to Samsung, the Samsung Galaxy Y Duos will be available in stores starting second week of February.

Warning: This wallpaper could soft brick your phone

Samsung opens online store in the PH, celebrates with promos