There are so many iPhone battery cases in the market but Third Rail Mobility’s offering is the most intriguing, and honestly, the most practical concept I have come across so far.  The Third Rail iPhone 4/4S battery case is being offered as a three in one solution – it is a slim protective case, a power backup for the iPhone, and also a power backup for other devices.  How is this possible, you ask? Third Rail made the battery pack detachable from the slim iPhone case, so when you want to charge other devices, the detachable power pack connects through these devices through a micro-USB port.

There are other iPhone cases with detachable battery packs like the Boostcase, which I had the chance to review.  But unlike these battery packs, the detachable power pack in Third Rail, which it calls Smart Battery, can charge other devices.  It can be used to charge Android phones and tablets, BlackBerry phones, and practically any device that charges through micro USB or USB.

What’s more, users can stack as many Smart Batteries as possible. So if you have three Smart Batteries, for instance, you can either swap them individually, or stack them over each other.  This makes the iPhone thick and almost impractical to carry but if you simply want to charge your phone, this is quite helpful.

The Third Rail case, called Slim Case, is an elegant case, combining glossy and matte finishes.  The very bottom of the Slim Case shows a power switch and a micro-USB port.  At the back of the case, the connecting port for the Smart Battery can be seen, along with four openings in the corners. When attached to the iPhone, the Third Rail Slim Case does not add too much to the thickness or weight of the iPhone.  It is very thin and very light.  An iPhone with a Third rail protective case is almost as thin as an iPhone without the case.  It adds length to the iPhone though as the Third Rail has a connecting dock at the bottom.

The 1250 mAh Smart Battery itself is thin and small, with 4 legs in the corners that serve as locks when attached to the protective case.  So when additional power is needed, you simply attach the Smart Battery on the back of the case by dropping the 4 legs of the Smart Battery into the 4 openings.

The Smart Battery has an on/off switch that can be used to control the flow of power to the iPhone. When it is switched on, power will flow to the iPhone and will charge the iPhone’s battery.  So when your phone is fully charged, you have the option of turning off the Smart Battery.

As a backup battery juice, the Third Rail is quite useful.  A fully charged Third Rail Smart Battery adds about 8-10 hours of battery life to the iPhone.  It’s very handy and very light so it’s really very easy to carry.  The Smart Battery slips into any pocket. 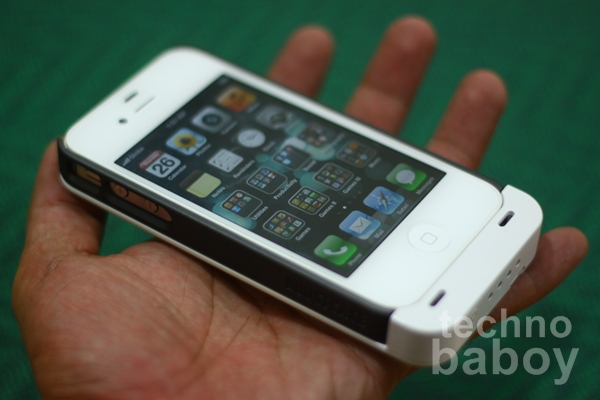