Just like the Nokia Lumia 920, the rumor about the Lumia 820 turned out to be real.   Nokia officially announced the Lumia 820 along with the Lumia 920 but unlike its mightier brother, the Lumia 820 is a mid-range handset that should carry a more budget-friendly price tag.

Unlike the Lumia 920, the Lumia 820 has ditched the curved display in favour of a conventional flat display.  The display is not as impressive as the PureMotion HD+ display on the Lumia 920 –  it’s the usual ClearBlack OLED screen with 800×480 resolution.

The Nokia Lumia 820 features a smaller 4.3-inch display but it also packs the same 1.5Ghz dual-core Snapdragon S4 CPU found on the Lumia 920.  The rest of the specs include 1GB RAM,  1650mAh battery, 8-megapixel Carl Zeiss rear camera, VGA front camera, 8GB on-board storage with microSD expansion and 7GB of storage on Skydrive.  It will come in LTE and HSPA+ variants.

Watch this intro video for the Nokia Lumia 820.

The Nokia Lumia 820 will come in Red, Yellow, Grey, Cyan, Purple, White and Black colors.  You don’t need to worry about picking the right color though as the Nokia introduced interchangeable covers for the Lumia 820. 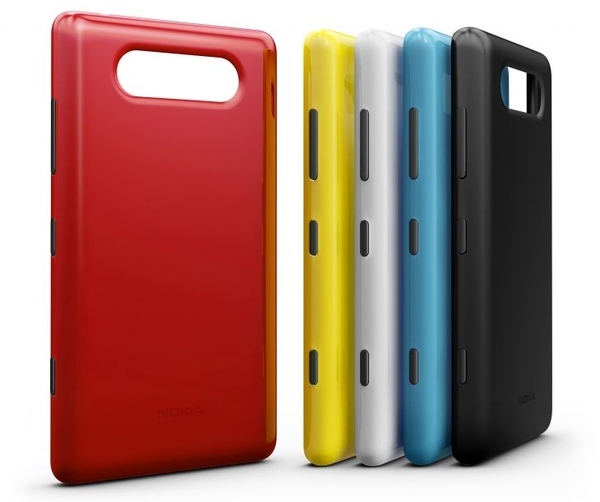 Details on pricing and availability in the Philippines have not been revealed yet.