At the launch of the new Tegra 4 processor, Nvidia also unveiled a new handled gaming device called Project Shield.  The device is powered by Tegra 4 and Nvidia claims it can plat console-quality games despite the small form factor.   Project Shield has a clamshell design with a full-sized controller located just below the device’s display. The controller features dual control sticks, a D-pad, and multiple action buttons. 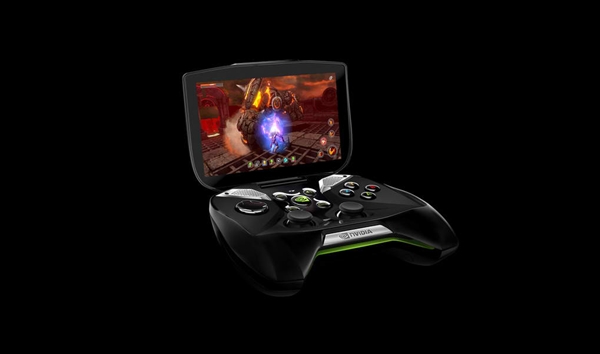 Project Shield sports a 5-inch 720p multi-touch display that can be classified as Retina-quality since it has 294ppi pixel density.  It has advanced sound processing that offers a sound performance similar to Beats Audio-equipped laptops.  For battery life, Project Shield has a 33Wh battery that provides five to ten hours of play time or 24 hours of HD video playback. The device has a slot for micro-SD card expansion for extra storage needs.

Project Shield runs pure Android and has access to apps on the Google Play.  This makes it a competitor of the Ouya gaming device, although the Shield is a complete gaming system while the Ouya is just an Android-based console.

Nvidia’s Project Shield supporting all of the games available to Android devices and the games in the Tegra Zone.  Project Shield makes it possible to project 4K resolution video over HDMI to external displays.  It also has the ability to stream games from a Windows PC equipped with a GeForce GTX 650 (or higher) graphics card to the handheld device over Wi-Fi.  Future iterations will have the ability to stream content from the Shield to a television wirelessly.

No pricing details have been revealed yet for Project Shield.  It will be available in the second quarter of 2013.