The Nokia Lumia 720 is a 4.3-inch device and has better specs overall compared to the Lumia 520.    The Lumia 720 has a polycarbonate body just like the Lumia 920 and is in fact slimmer and definitely lighter.   The Lumia 720 comes in at just 9mm thick and weighs only 128 grams.  It is available in a variety of bright colors typical of current Lumia designs.  In terms of hardware, the Lumia 720 should prove to be a capable handset, packing a dual-core 1GHz Snapdragon CPU, 512MB of RAM, 2,000mAh battery, NFC, wireless charging, 6.7-megapixel rear camera with f/1.9 lens, 1.3-megapixel front camera with wide-angle lens and 800 x 480 ClearBlack display.  Form these specs, it looks like the 512MB RAM would limit the performance of the phone but Windows Phone 8 OS has been proven to be smooth and light even if it is running on a 512MB RAM device.  The Lumia 620, for instance, proves that the 512MB does not constrain the phone’s performance.

The Nokia Lumia 720 will be available during the second quarter of 2013.  It will be offered in cyan, black, yellow, red and glossy white colors and will be priced at about $330.  Check out this video featuring the Nokia Lumia 720. 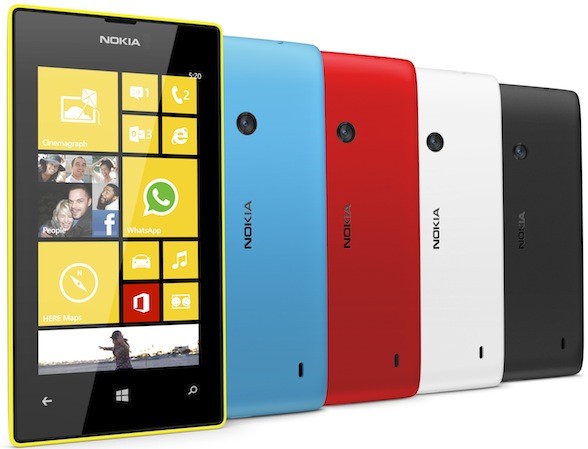 The Lumia 520 uses the same dual-core 1GHz Snapdragon CPU found in the Lumia 720 and also uses the same 512MB of RAM.  Rounding up the main hardware specs are the 5-megapixel rear camera, 8GB storage, microSD slot (up to 64GB) and 1,430mAh battery.  The Lumia 520 will come in cyan, yellow, red, black and white colors and will be available beginning this quarter.

Check out this video on the Nokia Lumia 520