Google just launched the Google Keep app, a new note-taking app that will directly compete against the popular app Evernote.  If you use Evernote, more or less you have an idea what Google Keep is about and how it works basically.  Google Keep is now only available on Android but in the future, there is a possibility that the app will find its way to iOS and other platforms.  The keyword is “possibility” as Google has not made any announcement yet on the availability of the app on other platforms.

Google Keep keeps your note-taking tasks much simpler.  You don’t need paper or pen to keep notes of things, which notes you may just lose at some point if you’re not organized.  With Google Keep, you keep everything in your devices, or the web, using just one account.  You can make simple notes and checklists which Google Keep enhances by letting you add photos.  If your hands are busy and can’t type on your device, you can use the app’s voice memo transcribe.  Google Keep also has a fast search feature to let users find their notes easily.  Organizing your notes is rather easy.  You just drag notes around and assign specific colors. Archiving notes is as easy as swiping them. 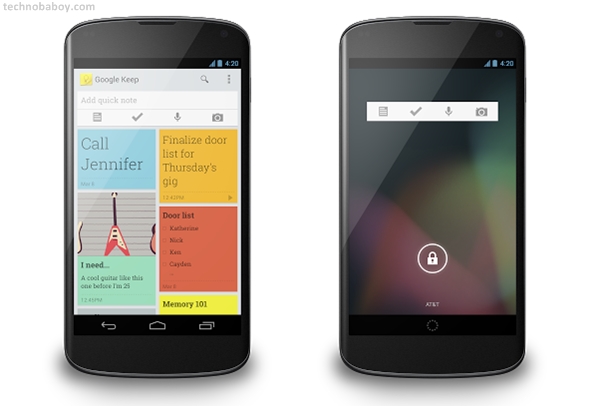 There’s a widget for this app so you can have it available and accessible at all times.  The app is now available for download on Google Play and is compatible only with phones and tablets running Android 4.0 Ice Cream Sandwich.  For devices running Android 4.2 and higher, there’s a lock screen widget, which mean the Google Keep widget may be accessed without having to unlock your device.  Here’s an intro video for the Google Keep app.

Is Google Keep better than Evernote.  That depends on what your use for the app is.  When it comes to the basic task of taking notes and organizing them, Google Keep seems to be the better choice and it has a cleaner and better-looking UI to boot.   However, Evernote has more features at this point and is available on more platforms.  In the future, Google Keep could have all the other features that Evernote has.  For now, I’ll use Google Keep.  I find it easier to use.