Samsung just unveiled a new mirrorless camera running on Android Jelly Bean.  It’s called the Samsung Galaxy NX packs a 20.3 megapixel APS-C sensor and an interchangeable lens system.  So for owners of NX cameras, you can use lenses on those cameras on the Galaxy NX.  This is a feature-packed camera as it features 3G / 4G LTE, WiFi and Bluetooth 4.0 connectivity.

For display, the Samsung Galaxy NX uses a 4.8-inch HD LCD display.  The device is powered by a 1.6GHz Pega-Q quad-core processor and imaging tasks are powered by a DRIMe IV Signal processor.  The Galaxy NX has a unique AF system that’s said to be a hybrid of those used on DSLRs and compact cameras.  It features a shutter speed of 1/6,000th of a second and a shooting rate of 8.6fps. Being an Android device, the Samsung Galaxy NX has an Android interface but it has a device wheel that offers quick access to its 30 Smart Modes. 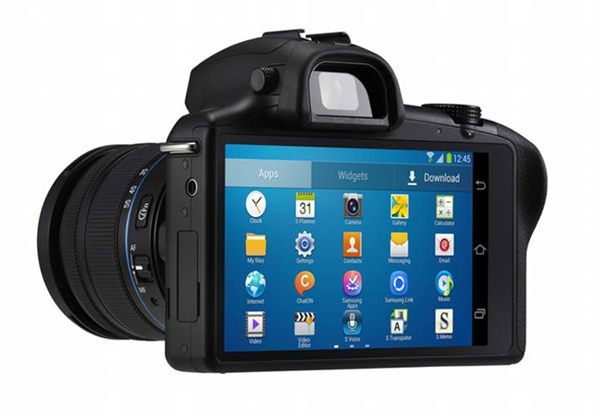 Unlike the Galaxy S4 Zoom, the Galaxy NX is a more serious camera for photography enthusiasts.  It is a system that is heavy on technology yet it is aimed at more serious photographers, not causal shooters.  The Galaxy NX’s sensor is good, the system is good, and there are a lot of connectivity options.  This is a dream camera for mobile shooters that still prefer using zoom lenses.

There’s no word yet as to the Samsung Galaxy NX’s pricing and availability.