Instagram made a couple of major updates to its iOS app and one of these updates is something a lot of users probably need, but don’t really want.  Before, Instagram can only be used with the camera in portrait orientation but now users will surely welcome the new feature update.  The latest Instagram update now allows photos to be taken on landscape, which really should have been there from the start.  Sometimes it’s just convenient to take shots with your phone in landscape orientation than portrait.  The new update is more useful in taking videos where most are taking using both hands for steadier shots.

When you are on the new version of Instagram, the control buttons automatically rotate when you tilt your phone to landscape version.  The shots taken, although still in square sizes, are automatically in portrait orientation when posted.  I can see why Instagram had to make this update.  When the app was intended for photos only, shots can be rotated using the app itself before you post your final version of your photo.  This is difficult to achieve with videos, hence the landscape orientation on the latest update.

The new Instagram update also adds cinema stabilization to the front-facing camera.  Before the update only the rear camera had cinema stabilization.  Again, this is a welcome update and users who are now into so called Vidstagrams or Instavideos will certainly be happy they can take “selfie” videos with less of the shaking that normally comes with the shots.

The latest version of Instagram is version 4.0.2.  Don’t mistake it for an Android version.  There is no word when the update to the Android app will be released but it’s just a matter of time. Android fans have no choice but to wait a bit. 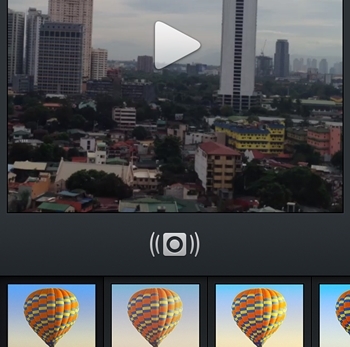