I have been a long time fan of Apple’s iPhone because of its sleek and classy design.  In fact I currently use an iPhone 5 as my daily driver.  But that doesn’t mean I’m clearly for Apple in terms of OS preference.  I love Android and the customization options that it brings to the table, only that, for a long time, there was no real counterpart of the iPhone in the Android world.  There was nothing that really came close to the iPhone’s design.

The HTC One was the first premium Android handset that was introduced in the market but while it may be close to the iPhone in terms of construction, it’s still not close in terms of design elements.  Huawei’s Ascend P6, however, is as close to an iPhone as any phone can get.  In fact, you’d mistake it for an iPhone with a big display.  If I were to switch to Android from iPhone, the Ascend P6’s build and design could be reasons I do so.

There’s no denying that the Ascend P6 was inspired by the iPhone.  The sharp edges, the silver band on the side, the metallic buttons and the pin-operated trays are iconic design elements of the iPhone. 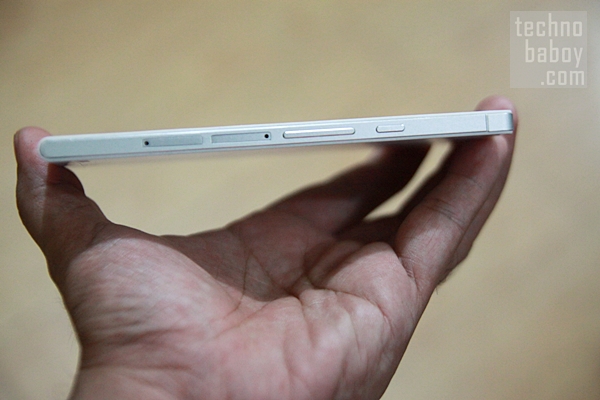 The Huawei Ascend P6 comes in at only 6.18mm thick, prompting Huawei to claim that this is the world’s thinnest phone.  It certainly feels very thin on the hand and I have yet to use a phone that’s slimmer than the Ascend P6.  It’s also very light, weighing only 120g, which makes it really pocketable and easy to carry around.  The Ascend P6’s silver band doesn’t go all the way around the entire phone as the bottom part is rounded.  This makes the Ascend P6 somehow uncomfortable to hold. 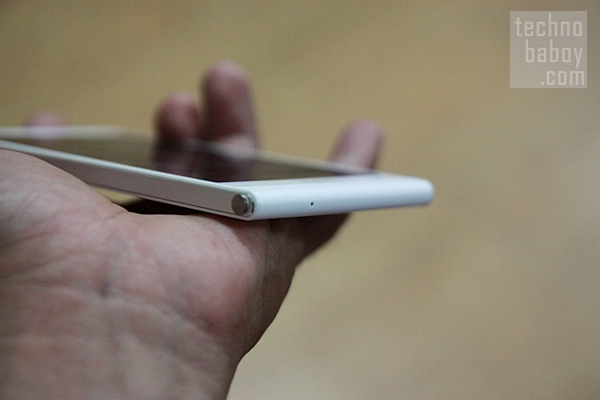 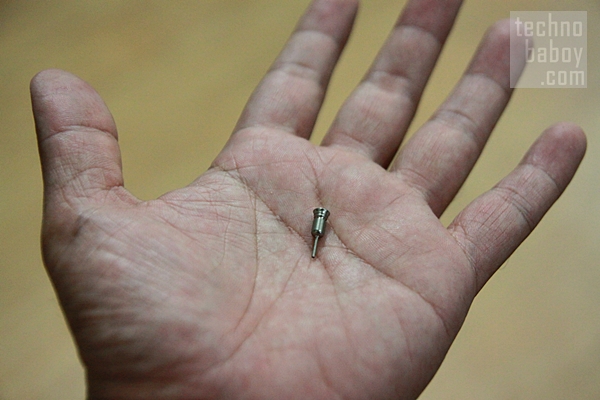 That’s a good way to use a mostly empty slot but if you’re a music buff and always need to play tracks, you’ll still end up storing this pin somewhere else.  Going through the rest of the slots and buttons will reveal a microSD card slot on top and the power button and volume rocker on the right side, flanked by the microSD and SIM trays. 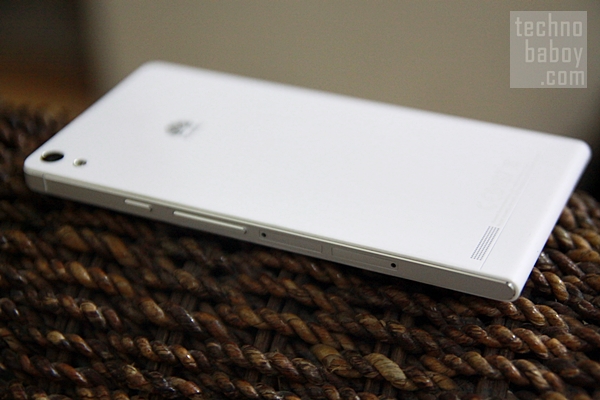 The Huawei Ascend P6 has a good set of hardware specs.  It is powered by a 1.5 GHz quad-core Cortex-A9 CPU and 2GB of RAM and packs an 8MP autofocus rear camera with LED flash and a 5MP front-facing camera.  What could be a dealbreaker for some is the rather small 8GB of built-in storage and the lack of LTE and NFC.  But all the rest of the specs still make this phone a good choice, especially if you particularly dig this phone’s design.  Here is a rundown of the main specs of the Huawei Ascend P6.

The Ascend P6’s display is sharp and crisp, with a more natural color reproduction than a Super AMOLED display.  Some people prefer this over the saturated colors of the Super AMOLED, but to each his own. 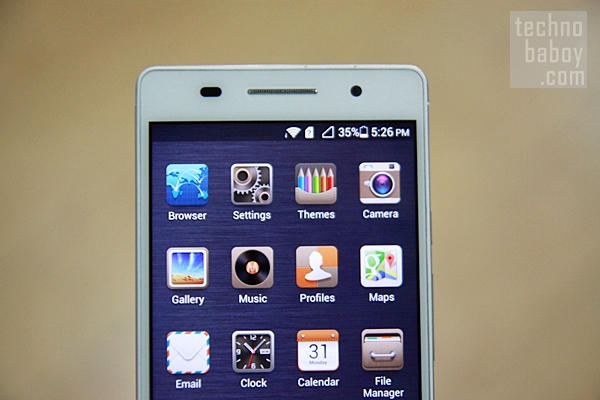 Personally, I prefer something closer to the natural hues and shades.  The display on the Ascend P6 has a 720p resolution, 1184×720 to be exact, but in actual use, it looks like a full HD display.  The 320dpi screen is rich and vibrant it’s a real delight to view photos and watch videos on this phone.

The Huawei Ascend P6 runs Android smoothly.  Transitions are buttery smooth and opening apps is quick and fast.  Multitasking is even good on the device.  The Huawei Ascend P6 plays games nicely and even those that rely heavily on graphics are handled well. 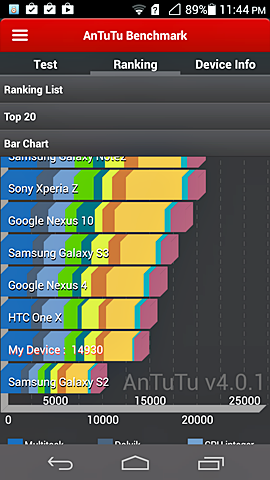 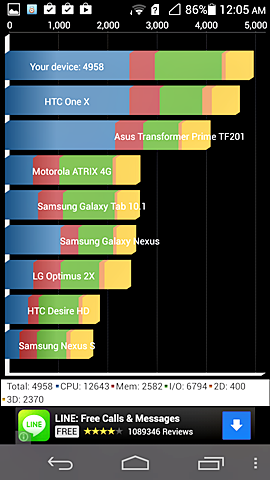 These are not impressive scores and if you’re one who’s always looking to own the best and the fastest, the Huawei Ascend P6 is not the phone for you.  But these scores are still good considering the compromises Huawei had to make in order to achieve the slim form factor.

Again, despite the benchmark tests, the quad-core running Huawei Ascend P6 is still considerably fast compared to most Android devices in the market today.  At the end of the day, it’s still a quad-core device that packs 2GB of RAM and in actual use, the fast performance actually shows.  I am satisfied with the performance of the Huawei Ascend P6, though I’m not a heavy mobile gamer.  If you’re into power-hungry and graphics-intensive games, you might see the Huawei Ascend P6 falter, although I have yet to see it happen. 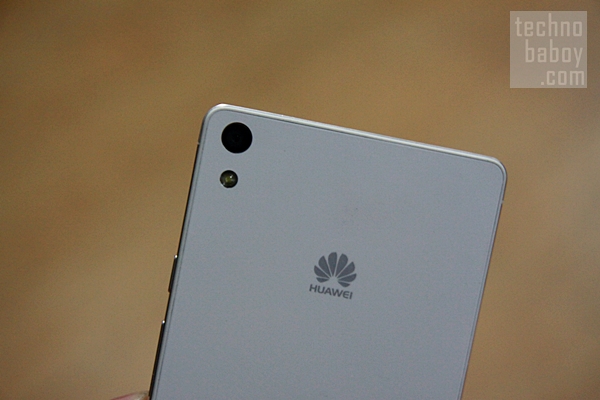 The 2000mAh battery on the Huawei Ascend P6 delivers a decent real world performance.   A single charge doesn’t last the whole day but considering the slim form factor, this is understandable.  Huawei promises 14 and 30 minutes of talk time, which is already a lot.  If you’re a heavy phone user, with your browser always open or apps always running, you’ll get a considerably short battery life out of the Huawei Ascend P6 so always be ready with your charger.

The Huawei Ascend P6 runs a heavily skinned Android 4.2.2 Jelly Bean.  Huawei runs its own Emotion UI on top of the basic Android OS and the result could be polarizing.  Some would love what Huawei did with the icons and with the entire feel of the OS, but purists would once again hate the customizations and prefer vanilla Android. 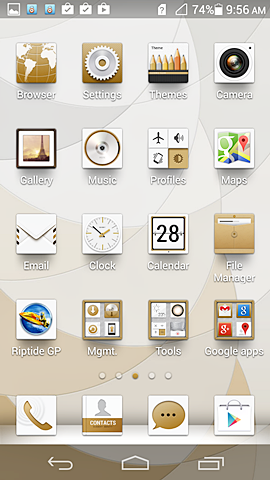 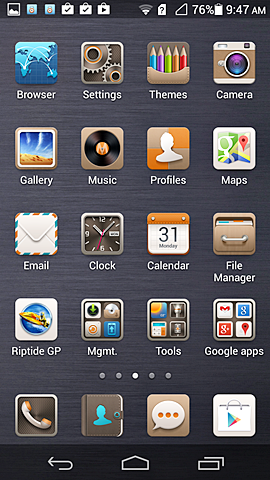 In a market with countless Android handsets, one must do anything to stand out, and Huawei’s Emotion UI is actually one of the nicest implementation of Android I have ever used.   I am used to the UI on the iPhone and appreciated the fact that Emotion UI is almost similar to the iPhone.  The main change Huawei did is to remove the apps drawer function that is standard on Android and decided to move all app icons to the home screen.  So you will not find an app drawer button on the Huawei Ascend P6. 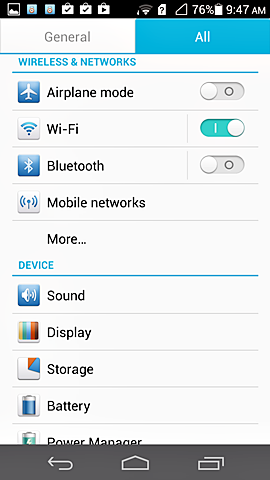 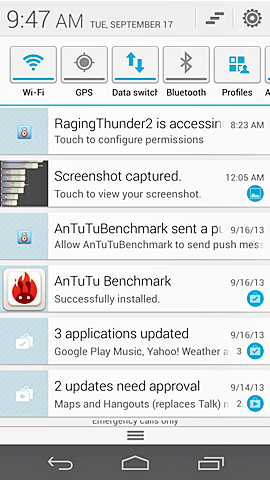 Huawei loaded the Huawei Ascend P6 with themes so there should be one that will fit everyone’s taste.   These themes are eve customizable so you can choose the icon pack or the screen lock style that fits your taste. 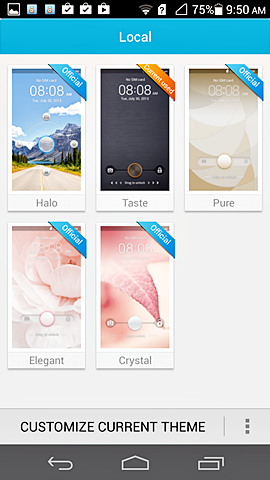 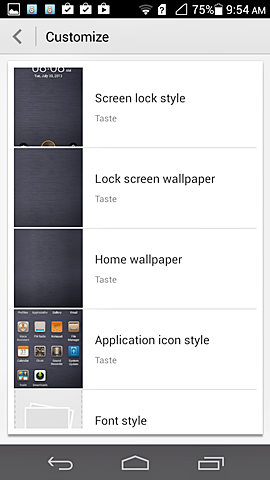 In any case, if you need the near stock Android experience, launcher apps like the Nova Launcher will do the trick.  Personally, I like what Huawei did to the UI, so I stuck with the themes that came with the phone.

The Huawei Ascend P6 packs an 8MP autofocus rear camera with LED flash capable of 1080p video recording @ 30fps.  It produces decent shots that are crisp and rich in details.  Colors are rendered accurately, although in low light settings, noise is apparent.  The LED flash comes in handy in these situations.  I like it that the camera on the Huawei Ascend P6 does not oversaturate or overprocess images, letting you get shots that are closer to reality.

Here are sample shots taken with the Ascend P6. 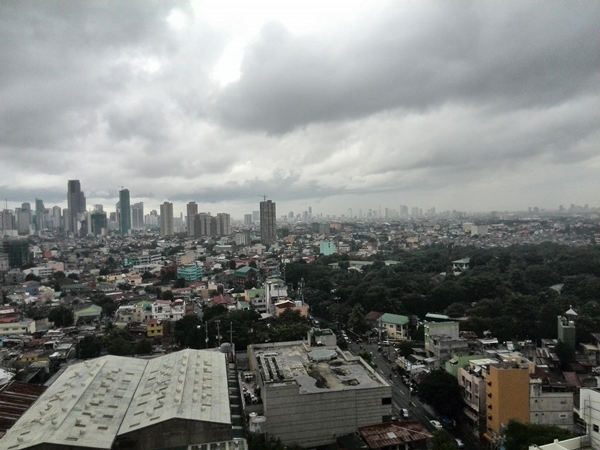 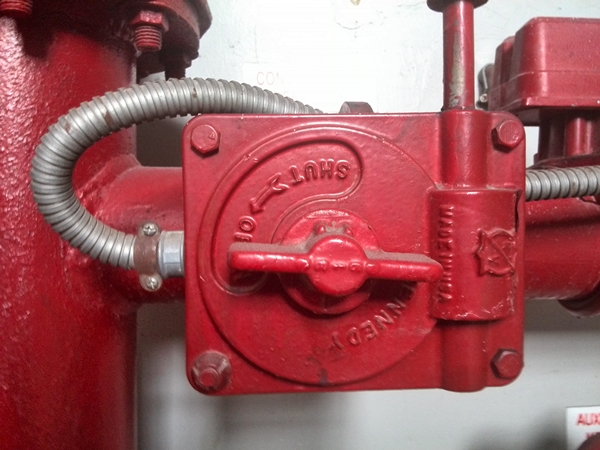 The camera software has the basic stuff you need and then some.  With the Huawei Ascend P6, you can take HDR shots and panoramic shots and apply effects if you want.  There’s also a beauty shot feature that lets you choose the level of smoothness you want to use. 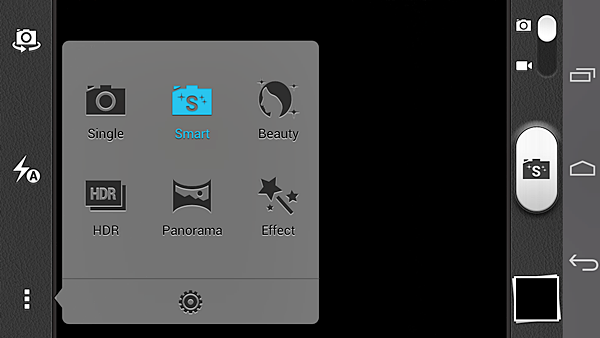 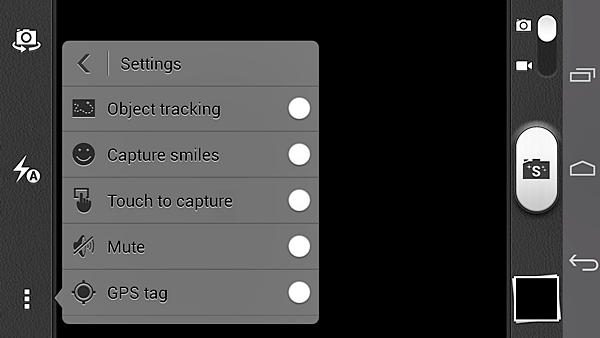 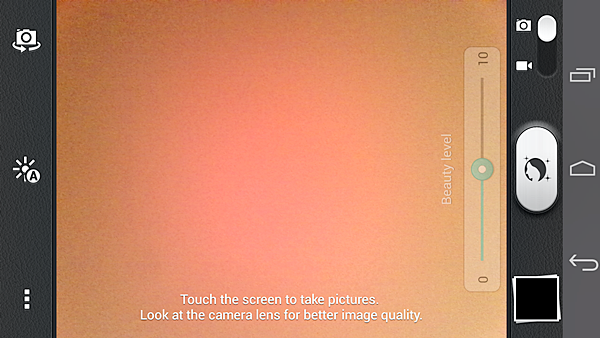 Huawei succeeded in its attempt to produce a premium handset.  With the Ascend P6, Huawei was able to marry stunning hardware design and premium construction.  This was previously the domain of Apple but products like the Ascend P6 prove that it can also be done by others.  If you are looking for an Android smartphone with premium design, the Ascend P6 is your easy choice.  It’s simple stunning, it’s slim, sleek and well crafted.

However, the Huawei Ascend P6 is not perfect.  Some would frown at its 8GB internal storage, or its lack of LTE or NFC, but these are necessary trade-offs or compromises.  To make a device as slim as the Ascend P6, Huawei had to cut corners.  And to also reach the P18,990 price, it had to leave out some features.

Overall, the Huawei Ascend P6 is a good Android phone.  It’s not perfect but I’d definitely recommend it.