Motorola is rumored to be preparing another Moto handset called Moto G.  Motorola itself showed a device on its website with the Moto G label even though no such handset has been announced yet. The Google-owned phone manufacturer previously released the Moto X, a flagship device that featured customizable colors and top hardware specs. 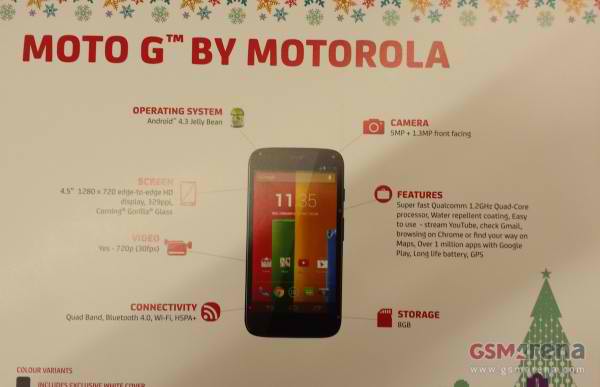 The Moto G, on the other hand, is a mid-tier phone that is expected to command a lower price.  GSMArena was able to get a promo card that shows the specs of the Moto G.   The phone has some similarities with the Moto X but the specs are less impressive.  Based on the leaked promo card, the Moto G features a 4.5-inch 720p edge-to-edge display with Gorilla Glass reinforcement.  It packs a 1.2GHz quad-core CPU, 8GB of built-in storage, a 5MP rear camera, a 1.3MP front-facing camera and 1,950mAh battery.  The Moto G will run Android 4.3 Jelly Bean out of the box, not the new Android 4.4 Kitkat version.  This should not be an issue though as Google definitely would not want Motorola phones to be behind in OS build.

The Moto G is expected to retail for £134.95 off contract and is rumored to have interchangeable back panels and a certain level of customizability, although not the same extent as that on the Moto X.