Is it me or is the word “octa” abused by phone manufacturers? 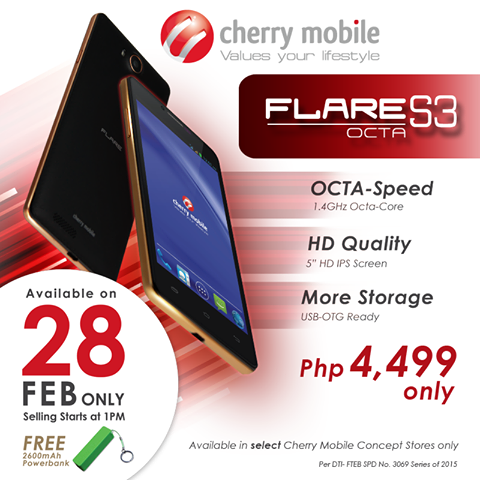 Cherry Mobile has just announced that the Flare S3 Octa will go on sale starting February 28, 2015. The successor to the popular Flare series, the S3 Octa features a 1.4GHz octa-core processor and a very attractive Php4,499 price tag. Other specs include a 5 inch 720p HD screen, 1GB of RAM, 8GB of storage, a 13MP main camera and a 5MP front camera. There is no mention about battery size though, but it does come with a free 2,600 mAH power bank (which could mean bad things about its battery capacity). Last but not the least, the S3 Octa is powered by Android 4.4 KitKat.

Now, it remains to be seen how fast or how far the Flare S3 Octa could go. But if the past Flare iterations are any indication, then we could be looking at a very capable phone with a very competitive price.

If you’re interested in getting a Flare S3 Octa, then just proceed to the following locations: