LG Mobile Philippines introduces a new member of the G4 series, the LG G4 Stylus. The smartphone has the same arc shaped body found on the flagship G4 with the addition of a stylus and a slightly larger screen. 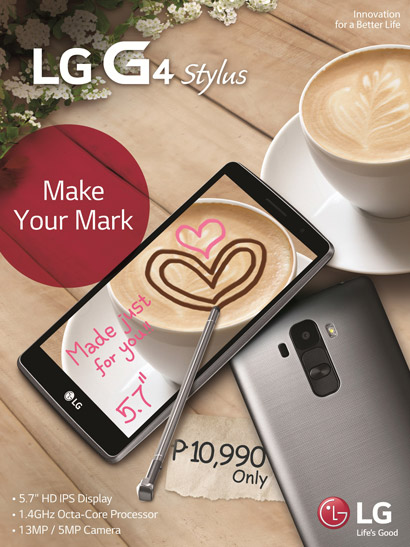 The G4 Stylus has a 5.7 inch 720p HD IPS screen which uses a zero-gap in-cell hybrid touch technology. It is slightly bigger than the G4’s 5.5 inch, but with less resolution. This makes for a better viewing experience for games and movies or for those who enjoy taking down notes.

In terms of processing prowess, the G4 Stylus is powered by a 1.4 GHz octa-core Snapdragon 410 processor and 1GB of RAM. It comes with a removable back plate, and a microSD card slot to compliment the 8GB of storage. Other notable features include a 13-megapixel rear camera with Laser AutoFocus, a 5-megapixel front camera, Dual SIM functionality, a large 3,000mAh battery life, and Android 5.0 Lollipop OS out of the box.

Lastly, along with most of LG’s handsets, the G4 Stylus comes with a set of staple features such as the Gesture Shot, Knock Code, Glance View, and Front Camera Light for selfies.

The LG G4 Stylus retails for PHP 10,990 and comes in Titan Black and White.