After all the leaks and rumors, it’s finally here! Samsung officially unveils the Samsung Galaxy S8 and the Galaxy S8+.

Even with all the leaks and rumors surrounding the devices, Samsung still managed to wow everyone with the official unveiling of the Galaxy S8 and the Galaxy S8+. These are really beautiful smartphones. And yes, it looks like the South Korean tech giant made due without the “edge” branding.

Now, let’s have a quick run down of what these two have to offer.

The new smartphones feature a sleek innovative design, where glass seamlessly molds with the metal frame. It looks and feels very new and refreshing. It has very narrow bezels that, combined with the curved sides, results to a mostly screen front. Samsung has also gotten rid of the home button and the capacitive navigation keys, opting to use onscreen virtual buttons instead. Interestingly, pressing the home button gives off a vibration (ala Apple 3D Touch). They also moved the fingerprint scanner to the glass covered back.

Other notables include a USB Type-C port, updated icons, and the presence of an audio port (hooray!).

The Galaxy S8 and the Galaxy S8+ boast quad HD AMOLED displays, which Samsung calls an Infinity Display. The innovation features an end-to-end screen that spills over the phone’s side (something like the edge before it) forming a smooth, continuous surface, making it appear like an uninterrupted glass that naturally flows into its aluminum shell. The Galaxy S8 measures in at 5.8-inches while the Galaxy S8+ at 6.2-inches.

Both the Galaxy S8 and the Galaxy S8+ pack 12MP Dual Pixel Rear Cameras, equipped with a bright f1.7 lens for improve low light performance, a dual LED flash and Smart OIS. It uses a multi-frame technology where it captures multiple shots and layers them into a final photo, resulting in sharper and clearer images.

For the front cameras, both phones sport an 8MP sensor with a Smart Autofocus feature.

Under the hood, both flagships are powered by Samsung’s Exynos 8895 processor.  It uses a 10mn architecture for improved performance and power consumption. It is paired with 4GB RAM, a Mali G71MP20 GPU and 64GB of storage.

The phones also feature a new version of TouchWiz with new icons. It is based on Android 7.0 Nougat. As for the battery capacities, the Galaxy S8 sports 3,000 mAh, while the Galaxy S8+ with 3,500 mAh. Both come with fast charging.

No surprises here. Both phones’ predecessors featured IP68 water and dust resistance, so it should follow that these two have it. Having said that, an extra layer of protection is always nice to have because you’ll have less thing to worry about.

The Galaxy S8 and the Galaxy S8+ features a slew of security technologies including a Fingerprint Sensor (now placed at the back), the new Face Recognition and an Iris Scanner (introduced on the much-loved discontinued Galaxy Note7). According to Android Authority, the Iris Scanner uses mathematical pattern recognition of images of the iris. Like a fingerprint, it is unique to you and almost impossible to replicate. If it is anything like the Note7’s, then it will be fast and responsive.

The flagships are also equipped with Samsung’s first intelligent personal assistant named Bixby. Bixby Visual uses the camera for search and categorizes an image into text, image, shopping, QR code, location and wines. It uses the recognition data to give you information about dates of a certain place, extract text from images to word file, translate text into 52 languages or assist you in shopping.

Bixby Voice works via voice commands. It can help you segregate photos in an album ,edit photos, send text messages and more.

The Galaxy S8 and the Galaxy S8+ will support a new ecosystem of accessories. These include the new Samsung DeX — a new mobile desktop experience allowing you to navigate your mobile apps like in a desktop, the Gear 360 — Samsung’s spherical 360 camera, and the Gear VR — which now comes with a controller for a more immersive virtual experience.

I’ve compiled what I found on various news sites on the Galaxy S8 and Galaxy S8+‘s specs here for those interested.

The Samsung Galaxy S8 and Galaxy S8+ will have a retail price of Php39,990 and Php45,990 respectively. It will come in Midnight Black, Maple Gold and Orchid Gray. Pre-orders will start on April 17 to April 29, 2017 in Samsung Experience Stores or through Lazada.com.ph. Those who pre-order will get a free wireless bottle design speaker worth Php5,099.

A big thank you to our friends at PinoyTechBlog for the gorgeous photos. Check their post for more details of the launch. 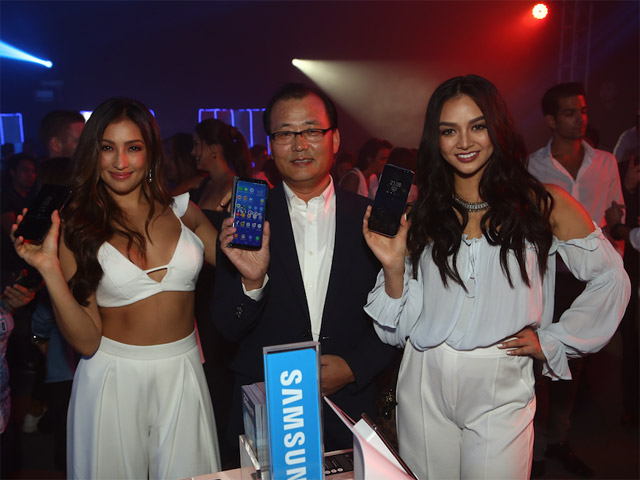 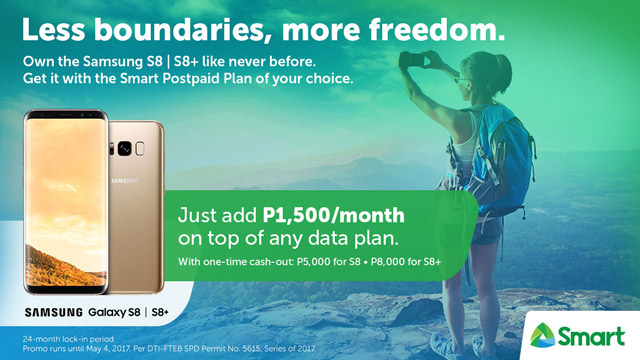 Samsung Galaxy S8 and S8+ now open for pre-order with Smart; Get one for as low as Php1,899 per month 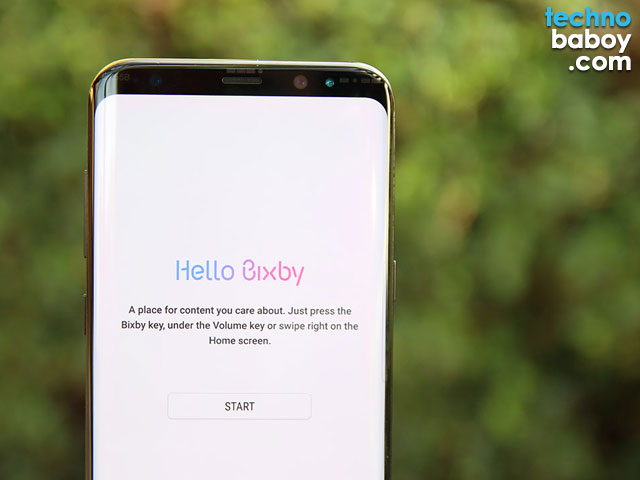