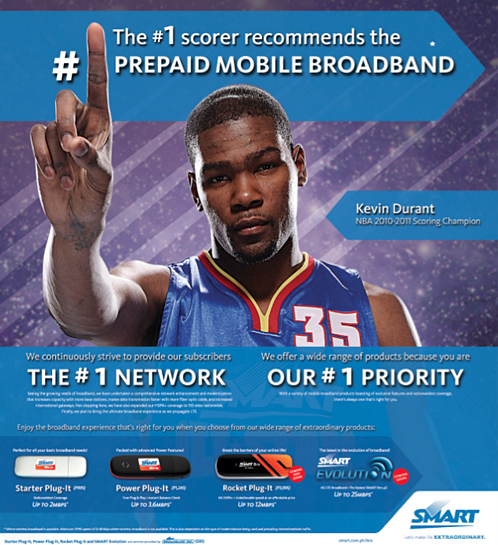 Guess who’s the new endorser for Smart Bro? It’s none other than NBA superstar Kevin Durant, whom we saw recently playing with other NBA superstars in an exhibition match against our PBA and Smart Gilas players.

Kevin Durant has made a name in the NBA as scoring champion, snatching back-to-back league scoring titles in 2010 and 2011.  During the last season, we saw him guide his team to the western Conference Finals against the Dallas Mavericks.  At 6’9” the NBA guard/forward has one of the most reliable shooting touches in the league and I personally believe he will carry his team to an NBA championship in the years to come.

Kevin Durant’s dedication and drive to excel as a player has been well-documented in the NBA and his desire to improve his game has helped him establish himself as a dominant force in the league.  Apart from his exploits in the NBA, he also lead the USA Basketball Team to a gold medal finish at the 2010 FIBA World Championships.

Kevin Durant’s endorsement of Smart Bro is quite big in the tech world.  Rarely do we see non-local stars and celebrities endorsing for local products and services.  And for Smart Communications to pick someone as big as Kevin Durant (pun intended) to represent the Smart Bro brand is something out of the ordinary.  It’s therefore something that’s expected to make quite an impact in this basketball-loving country.

We know that Smart Bro is a leader in prepaid mobile broadband in the country.  Kevin Durant is therefore the perfect celebrity to endorse the service.  Just like Kevin Durant who continues to hone his skill and find ways to improve his craft, Smart Bro continuous to showcase the latest advancements in broadband technology.  It’s therefore not surprising that in a recent speed test done in July 2011 in various key cities nationwide by NESIC Philippines Inc. (NPI), an international engineering and telecommunications company, Smart Bro emerged as the faster broadband service, being faster than the competition in 99 out of 100 areas tested at peak speeds.  It is also faster in all areas tested at average speeds.  Impressive.

What gets me excited about Smart Bro is their upcoming Bro Rocket Plug-It which is capable of speeds of up to 12mbps.  Yes, you heard it, 12mbps!  I can’t wait to get this broadband plug-it which will be offered on prepaid.  Hopefully, it delivers on the speed promised. 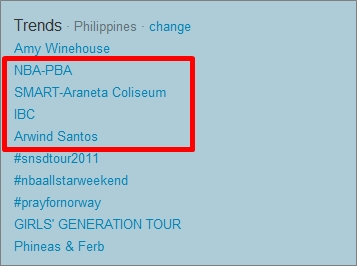