Hollywood celebrity Paris Hilton arrived in the Philippines on Sunday night.  She will be in the country for 5 days and she is scheduled to meet Manny Pacquiao and other business partners.  She is here to design a clubhouse in a condominium project and also to promote her store in one of the big malls in Metro Manila.

Paris Hilton’s arrival in Manila was already enough to create a buzz but her lost iPhones also got headline billing in some online publications.  It has been reported that Paris lost two iPhones on  her way to Manila, which explains why her first tweet upon her arrival was posted using a Blackberry.  Here’s her tweet. 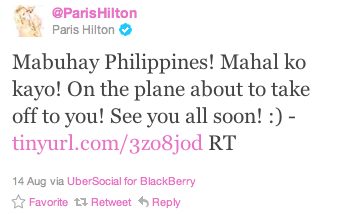 iPhones Were Not Stolen in the Philippines

After news broke out that Paris Hilton lost two iPhones, some were quick to conclude that she lost the phones in the Manila.  It was however denied by the manager of MIAA, saying that the phones were either lost inside the plane or even before Paris Hilton boarded the plane in Dubai.  This is consistent with reports saying that Paris immediately looked for her iPhones immediately after deplaning.