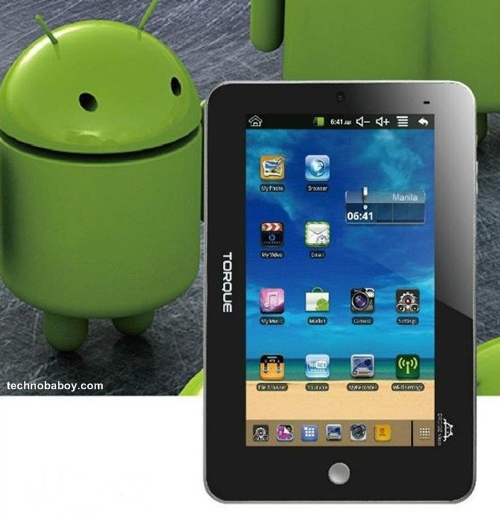 And I thought Cherry Mobile is the only local company capable of coming out with Android devices.  Torque also had two Android handsets in its lineup, particularly the Droiz Tandem and Droidz Dual, but these were released months ago and the company’s silence seemed to indicate that it would be dropping its Android efforts.  Fortunately, Torque appears to be back in the fight.

In its Facebook page, Torque revealed the Droiz View, a 7-inch tablet running Android 2.2 Froyo.  The tablet has the following specs and features:

The Torque Droidz View is going up against Cherry Mobile’s Cherry Pad and Cherry Pad Turbo Android tablets.   The Cherry Pad has almost the same specs as Droidz View, but with a bigger 4GB internal storage.  It’s unknown if the Droiz View has capacitive or resistive screen, though.  If it’s resistive, then the Cherry Pad, which also has resistive screen, has better specs overall.  In terms of price the Cherry Pad is cheaper at P3,899.  If you have the extra cash to spend, you should consider the P6,899 Cherry Pad Turbo which has much improved specs like 1.2 GHz CPU, HDMI port, Gingerbread OS and Bluetooth.

The Droidz View seems to be a weak effort from Torque but its good that some local company is giving Cherry Mobile some competition.  I hope Torque will come up with better-specced tablets in the future.

If you want to check out the Torque Droidz View tablet, you can visit Torque’e concept kiosks found in these areas: