There’s another Twitter app for Android users to try.  It’s called Carbon and it’s one of those aesthetically pleasing Twitter apps. The app’s dark theme certainly spices up Twitter but if you don’t like dark themes, there’s nothing you can do as there’s no way to change it.  Not now at least. Carbon started on webOS and was originally scheduled for release on Android last year but developers apparently hit a snag.

Carbon is a Holo-themed Twitter client that sets itself from other third-party Twitter apps by using cool transitions and special gesture commands.  The app is quick and sleek and is surprisingly easy to navigate.  It’s advantage is it puts all content in one screen, putting together shortcuts to Timelines, Lists, Favorites, Searches, Trends and Profiles.  If you have many Twitter accounts, Carbon makes it easier for you to switch between these accounts and between timelines. 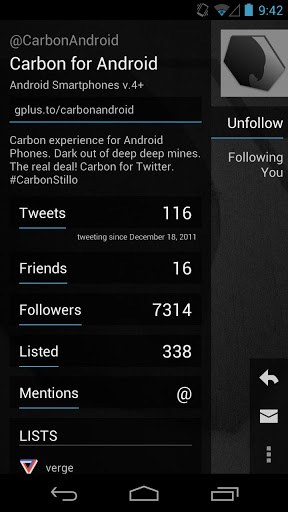 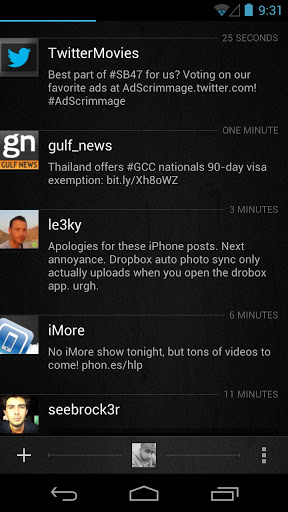 Here are the features and functions available on Carbon as enumerated on the app’s description.

What’s lacking as of now is push notification although the app checks for updates every 15 minutes.   Carbon is a free app so there’s really nothing to lose if you download the app and try it out for yourself.  The app is only available on smartphones for now but tablet support will be arriving in the future.