At the Samsung event in London two tablets were unveiled – the Samsung Ative Q and Samsung Ativ Tab 3.  The two tablets run Windows 8 but the Ativ Q runs Android as well. Samsung apparently recognizes the need to release Windows 8 tablets but recognizes the popularity of Android as well.  With the Ativ Q, Samsung targets those who love Android for tablets but needs Windows 8 on their device as well.

The Samsung ATIV Q is a slider device that can be used with a physical keyboard or as a touch screen tablet.  It has a 13.3-inch display that has an amazing 3200 x 1800 resolution for a 275ppi pixel density.

The internals are quite compelling.  The ATIV Q runs on a fourth-gen Intel Core i5 processor with Intel’s HD Graphics 4400 GPU paired with 4GB of RAM.  That’s fast enough for a Windows 8 tablet and even faster for an Android device.  For storage you’ll get 128GB courtesy of an SSD drive.  For connectivity options, you’ll be able to take advantage of a USB 3.0 and a USB 2.0 port, a micro HDMI port, and an SD card slot. There’s an Ethernet port that can be used through a dongle. There’s no rear-facing camera, just a front-facing one that can shoot 720p HD videos.

The device is not tablet-slim but it’s slim enough for a slider device.  It’s 13.9mm thick and weighs 1.29 kilograms.  Samsung promises a 9-hour battery life on the ATIV Q.

The Samsung ATIV Tab 3, on the other hand, runs only Windows 8.  It’s purely tablet device with a 10.1-inch display that has a 1366 x 768 resolution. Design-wise, it looks like the other Android tablets from Samsung.  The ATIV Tab 3 also has an S Pen which can be used on Microsoft Office apps. 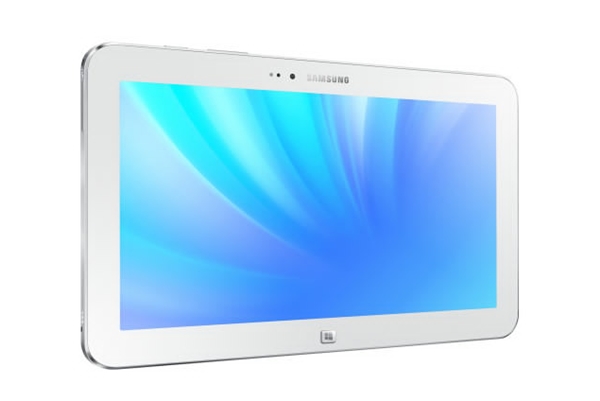 It’s not really a powerful device as it uses an Intel ATOM Z2760 CPU paired with only 2GB of RAM.  For internal storage, you’ll get 64GB but there is a microSD slot that can be utilized for expansion.

Compared the the ATIV Q, the ATIV Tab 3 is much lighter at 550 grams and is considerably thinner at only 8.2mm thick.  This is the thinnest Windows 8 tablet if we are to believe Samsung’s claim.  The ATUV Tab 3 lasts for 10 hours.  For connectivity, there’s one micro-USB slot and one micro HDMI slot.

Details on pricing and availability in the Philippines have not been released yet.