Cherry Mobile is drumming up interest on its upcoming Razor handset and it appears that the local phone brand may have another hit in its hands.  The Cherry Mobile Razor is the newest Android phone in the company’s line-up and its main selling points are its thin profile and very affordable price point.

We’re looking at a device with 4.5-inch qHD IPS display with Dragontrail reinforcement.  Cherry Mobile is claiming this will be the cheapest Dragontrail glass smartphone but as to how cheap it is, we will know in a couple of days.  The rest of the mains specs include a 1.2GHz quad-core processor, 1GB of RAM, 4GB of internal storage that’s expandable up to 32GB via microSD slot, t-megapixel AF camera with Flash, 2-megpixel front camera and 1750mAh battery.  For connectivity options the Cherry Mobile Razor has Wi-Fi, Wi-Fi hotspot, 3G, HSPA+, GPS and A-GPS.  The device will run Android 4.2 Jelly Bean which is really what new Android devices should run on. 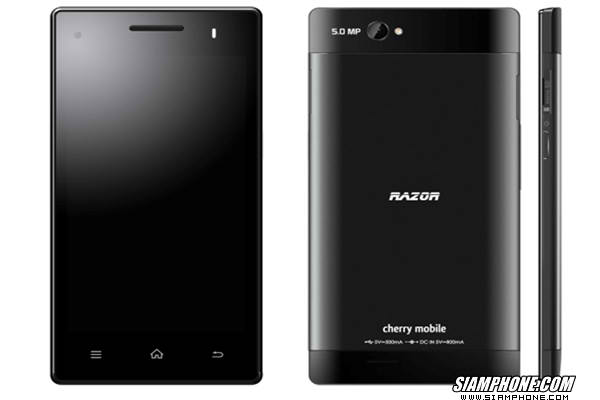 All in all, the Cherry Mobile Razor is a compelling device.  There’s really nothing to hate, except perhaps for the 4GB internal storage but that’s nothing that can’t be fixed with a microSD card.  The specs are good, but Cherry Mobile wraps all of these in a 7.7mm thin package.  That’s almost as thin as the iPhone 5.

Cherry Mobile is comparing the razor with the iPhone 5 and even posted a comparison chart on its Facebook page that goes like this.

Here are the main specs of the Cherry Mobile Razor.  A video showing how tough the display of the Razor is follows.

PRICE UPDATE:  Cherry Mobile surprised us yet again.  For the specs and features of the Razor, people would have been willing to shell out anywhere from P7,000 to P9,000 but the local phone brand just announced that the suggested retail price for the Cherry Mobile Razor is Php6,499.  That’s nowhere near the sub-P5,000 price of the Flare when it came out but the Razor is considerably better than the Flare.  In my opinion, the Razor’s retail price is reasonably cheap.

Do you think the P6,499 price is reasonable?  Are you thinking of buying the Cherry Mobile Razor?  Share your thoughts in the comments section below.