BlackBerry is rumored to be working on a 5-inch phone codenamed “Aristo” which will eventually ship as the BlackBerry A10.  It’s another BlackBerry 10 handset and it’s one that’s positioned for gamers with its Super AMOLED display and separate CPU and GPU processors similar to the architecture of the chip used on the iPhone 5.   The BlackBerry A10 will most likely replace the Z10 with its hardware features.  The A10 will be the most feature-packed BlackBerry phone yet and will be the most powerful.  BlackBerry fans will definitely be happy about the fact that the phone maker is finally stepping up its game and is trying to be competitive in a market dominated by Apple and Samsung.

Needless to say, it will be something different from the Z10 design-wise since it will have a sleeker and more premium finish.  The handset will reportedly feature a design similar to the Samsung Galaxy S4.  It will have rounded corners just like Samsung’s flagship device, but will be larger compared to the overall size of the Galaxy S4.

The hardware specs will include a dual-core processor and 2GB of RAM.  BlackBerry reportedly skipped a quad-core CPU as it has battery life concerns.  It will also sport an 8-megapixel camera.

UPDATE:  A video featuring the purported BlackBerry A10 has been circulating online.  Here it is for your viewing pleasure. 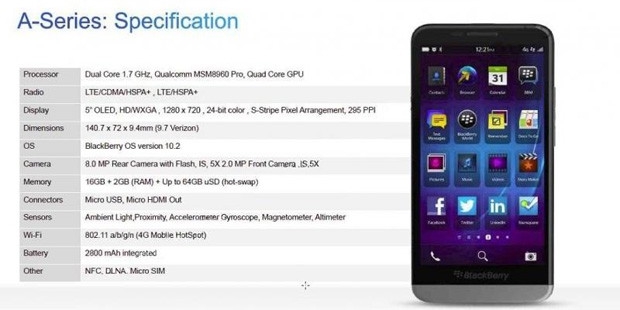