Huawei recently released a teaser poster of their upcoming smartphone, the Nova 4, with a camera hole on the display.

It looks like the next new “thing” for smartphones will be the camera hole instead of the notch.

This is the latest attempt by a major manufacturer to maximize the screen-to-body ratio which replaces the love-it-or-hate-it notch popularized by Apple.

Huawei will be one of the first to release such a device. The company has recently posted a teaser on Chinese social media site, Weibo, with the arrival date set on December 17, 2018. 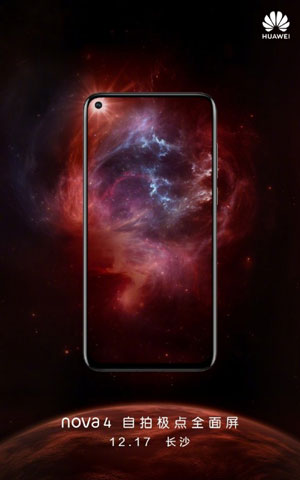 The teaser shows a near bezel-less layout with the camera hole at the top left corner, near the edge. The position looks ideal, but it does cover a small part of the notification area.

Apart from the camera hole, little is known about what else the phone brings. But we can speculate based on its predecessor, the Huawei Nova 3. That phone came with a Kirin 970 processor, so it might be safe to assume that the Nova 4 could come with a Kirin 980, with a price range close to the Nova 3.

In any case, we’ll find out in a couple of weeks when the Huawei Nova 4 debuts on December 17.