GMA News recently reported a picket by students and faculty members of Ateneo de Davao University as protest to the school’s policy to ban Facebook in the campus.   Ateneo de Davao now prohibits students from logging in on the social networking site from 8 a.m. to 5 p.m., claiming that the sheer number of people who surf Facebook on campus overburdens the university’s internet service bandwidth. 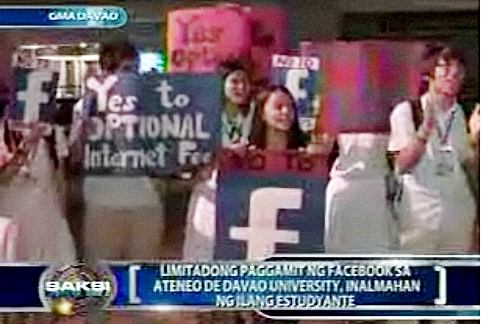 Students on the other hand claim that they pay P1,300 as “information technology fee” each semester so they demand that access to Facebook should be allowed.  They also claim that they were not consulted by the school on the new policy.

Social networking is now so popular in the country that we have been labeled as the social networking capital of the world.  In my opinion, the real reason for the ban is to prevent students and faculty from losing focus on the more important school related matters.

Kiefer Ravena Explodes for Ateneo in Game Against Lasalle, Trends on Twitter