The Samsung Galaxy Y is arguably one of the hottest handsets today and I’d like to think it’s because of the price.  The “Y”  in Galaxy Y stands for Young so this phone is obviously aimed at the young demographic with only a few thousand pesos to spare for a cellphone.   The Samsung Galaxy Y is quite attractively priced at P5,990 and for this amount, you get an Android handset running Gingerbread with access to Android market’s thousands of apps.

Is the hype justified though? Is the handset good enough for the price, or are there other handsets that offer better value?  Let’s find out.

The packaging for the Samsung Galaxy Y is just simple.  The small box housing the handset is predominantly white, with a photo of the device displayed outside and the name Galaxy Y at the bottom. 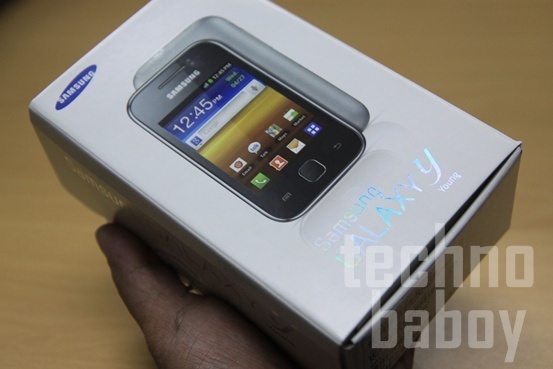 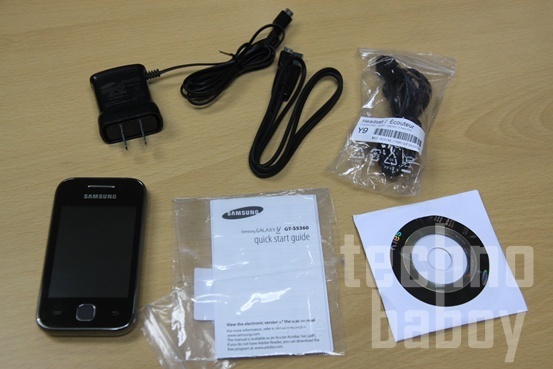 For the price of P5,990, don’t expect to get a premium handset.  The Samsung Galaxy Y feels plasticky all over, but it tries to look premium with its all black front, a silver back and a chrome trimming.  When you hold the phone though, there is no mistaking its cheap construction.  It’s light, which could be an advantage if you’re looking for a lightweight phone, but holding the handset simply tells you it’s not built for heavy use.  You just know that the phone will not be able to withstand some serious drops.  The handset is small, so there’s no problem typing or operating the device with one hand.  The problem with a small handset though, is you also get a small screen. 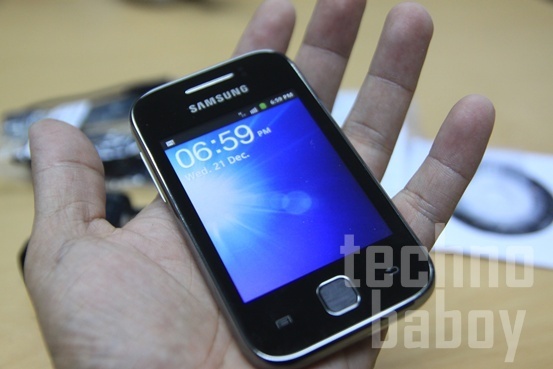 The handset has the standard buttons and connection slots.  You have the power button on the right, the volume rocker on the left, a microUSB port/charging port at the top covered with a flap and a 3.5mm headphone jack also at the top.  At the back are the camera lens and the speaker grille positioned beside each other.  At the front you see the Samsung logo at the top and at the bottom are the physical Home button flanked by capacitive Menu and Back buttons.  The Home button works just fine, with just the right amount of feedback, but the capacitive Menu and Back buttons are hard to use.  They are non-responsive most of the time and requires hard tapping before you get the reaction you expect.

Opening the back cover reveals the battery and under which is the SIM card slot.  At the left side is the slot for the microSD card. 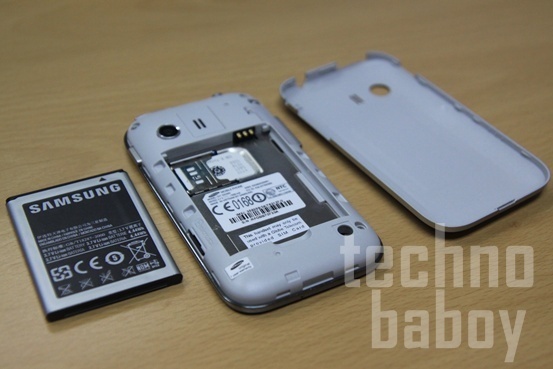 The screen of the Samsung Galaxy Y, as I mentioned earlier, is quite small.  The display measures only 3 inches.  At this size, you should expect that Samsung will use a high resolution screen, but instead the Galaxy Y features a disappointingly low res 240 x 320 pixels display which translates to a very low 133ppi pixel density.  At this resolution, the pixels are very visible, and with handsets getting better quality screens, it’s surprising that Samsung has slapped on a poor quality display.  I remember owning an HTC Wildfire before and I can compare the resolution of that handset’s display with the Galaxy Y’s display.  Naturally, photos and videos and stuff you put on your screen are poorly rendered.   There are other similarly priced Android handsets out there that have way better screen than the Samsung Galaxy Y.  So if you are very particular with screen resolution, you may skip the rest of the review and choose another handset instead.  I suggest you check out the Sony Ericsson Xperia X8 or the Alcatel Blaze Glory 918N.  These handsets have better displays .

The Samsung Galaxy Y runs on a 832 MHz processor, faster than the processor on the Galaxy Mini.  However, the performance, although not too sluggish, is noticeably slow and clunky.  For this processor speed I was expecting something smooth and zippy, but sadly, the Samsung Galaxy Y again failed to meet my expectations.  Apps take some time to load, and if you’re expecting to play graphics-heavy games on the Samsung Galaxy Y, expect some disappointments along the way.

The Galaxy Y runs on Android 2.3 Gingerbread with TouchWiz UI on top.  The fact that the phone runs Gingerbread is an advantage for the Galaxy Y.  For this price range, most handsets run Android 2.2 Froyo.  However, the TouchWiz UI might have contributed to the phone’s sluggish performance.  The TouchWiz on the Galaxy Y is very bare, though, and the decision to make it leaner is welcome since the hardware won’t be able to handle the processing power needed for the full TouchWiz experience.  But with the Galaxy Y’s subpar screen, the UI doesn’t look good.   The apps look bad too because of the screen’s quality.  Typing on the Galaxy Y is quite a task since the screen is small and the keys are pretty tiny.

Internet browsing on a 3-inch screen with 240 x 320 pixel resolution translates to a really frustrating experience.  It’s bad enough that the screen is tiny, and it’s made even worse by the super low resolution display.  The browser is fairly fast, but the output leaves much to be desired.  If you put a full website on the Galaxy Y’s screen, you won’t be able to make out the letters.  Thankfully, the handset has Flash Lite 4.0 support so there will be the occasional Flash ad but it does not handle Flash-based content. 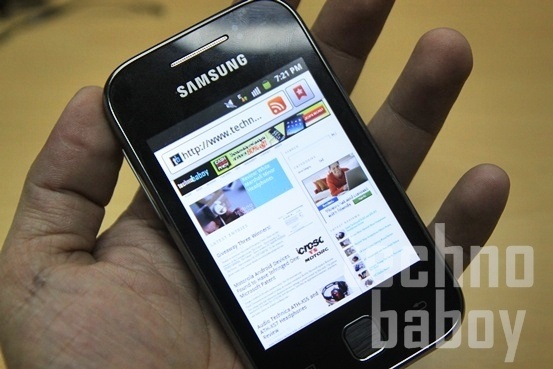 The Galaxy Y plays MPEG 4 videos but the default player does not handle avi or DivX videos.  It can play these files on third party players from the Android Market but the quality of playback is not smooth.  The phone’s speaker is loud enough for your music or videos but it’s a little flat.  There’s simply no power, no oomph.  The headphones have decent volume but they are practically useless if you want to listen to music.  The headphones are too bad it’s as if bass has been totally removed from the output.

Calls on the Galaxy Y are pretty average.  They have a fair amount of volume but it’s not that clear.  It’s not too bad as to be a deal breaker, but i have certainly used other low-end phones with clearer call quality.

The Galaxy Nexus uses a 1200mAh battery, and in real world situations, this is simply insufficient.  If you’re into browsing and social networking, you’ll get frustrated with the battery life of the Samsung Galaxy Y.  On heavy use, the Galaxy Y will not last you 12 hours on a single charge.  Eight hours is probably the right estimate.

The Samsung Galaxy Y has one of the crappiest cameras i have ever used, but for the price you’re paying, this should be expected.  But the Galaxy Mini had a 3 megapixel camera so it’s quite baffling that Samsung paired the Galaxy Y with a 2 megapixel camera. Don’t buy this handset if you shoot a lot of photos.  The shots have poor resolution, bad color reproduction, and has too much noise in them.   The Samsung Galaxy Y, sadly, is not a camera phone, and thankfully it does not pretend to be. 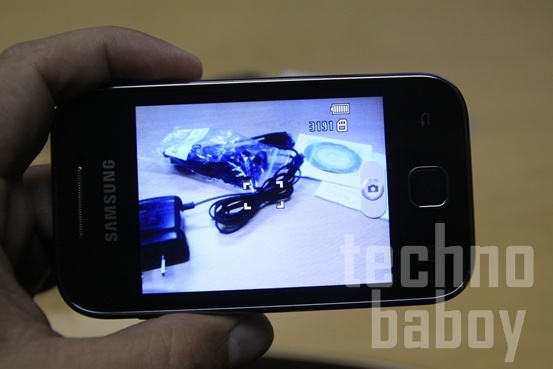 Here are sample photos I took with the Samsung Galaxy Y’s camera.  Click on the photo to see the bigger version.

Shooting videos of the Galaxy Y is equally bad.  The video output is QVGA with 15fps so i didn’t bother taking a sample.

The Samsung Galaxy Y is admittedly attractive, not because it has solid features but because of its price.  At only P5,990 (about US$130), you get a phone powered by an 832Mhz processor and runs Android 2.3 Gingerbread.  But what you should also consider is that for this amount, you get a poor resolution display and a 2 megapixel camera.  The Samsung Galaxy Y is not the best option when you are looking for an Android handset at this price range.  The screen is small at 3 inches and it has one of the worst resolutions I’ve seen on a handset. The 2 megapixel camera is a puzzle since the Galaxy Mini had 3 megapixels, so the price is not really an excuse to use this low resolution camera.

Admittedly, the Samsung Galaxy Y have redeeming features like Android 2.3 Gingerbread OS and, to a certain extent, the design.  It’s certainly an option in this category, but for me, it’s not the best option.

Motorola Android Devices Found to Have Infringed One Microsoft Patent