DTC is a relatively new phone brand in the Philippines, and like the more established companies Cherry Mobile and Torque, DTC is home grown.  It has a slew of handsets currently available in the market but it only has a few running Android OS.  DTC’s first Android phone was the GT3 Astroid and just a few months since its release, DTC now has an updated version, the GT5 Astroid Plus.

The DTC GT5 Astroid Plus is one of the most affordable Android phones in the market right now.  It is priced at P2,998, something that’s undeniably cheap for an dual-SIM Android handset.  At the outset, however, you should know that the Astroid Plus runs Android 2.3 Gingerbread, two versions behind the current one which is Jelly Bean.  If this is a deal breaker for you, then you may skip this review.  Gingerbread is however still a good version of Android and is still better than other operating systems not named Android, iOS or Windows Phone.  But admittedly, Gingerbread is unpolished and has less features compared to Ice Cream Sandwich and Jelly Bean.  The real question is, will you still be getting a good set of specs and an equally good performance from this phone?  After all, for a thousand or a couple of thousand more, you can choose a more capable handset from other brands.

The front of the phone is not all iPhone, though. There is no physical button on the front part of the phone, only three capacitive touch controls that correspond to the Home, Menu and Back functions.   Flip the phone over and you see a polished red back cover and a camera lens that reminds you of the camera on the HTC One X. 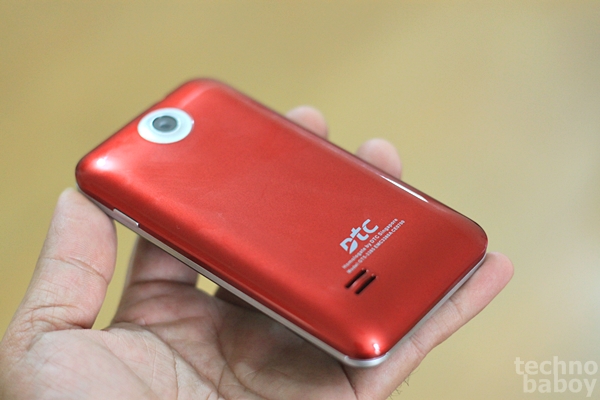 The placement of the control buttons is similar to those you see on Samsung phones.  You’ll find the power button on the right side and the volume rocker on the left side.  On top of the device you’ll see a 3.5mm headphone jack and a micro-USB slot.  That’s about everything you see from this phone. It’s worth mentioning that the control buttons on the side are very soft with a very nice feedback.  For a cheap phone that runs Andoid, the Astroid Plus is surprisingly well-built.  The overall design is polished, there are no loose or creaky parts, and it has a good heft when held.  The curved back contributes to a comfortable grip and I consider this as another plus for the phone’s design.

The hardware is just what you would expect from a cheap Android phone.  What you should know up front is that the internal storage for this device is only 512MB.  After built-in apps, you’ll only be left with a few hundred MBs for your other apps, so you’ll definitely need a microSD card.  What may be the redeeming factors for this phone are the bright display and the 1GHz processor.  Below are the main specs of the DTC GT5 Astroid Plus.

The display of the GT5 Astroid Plus does not disappoint.  Again, I need to reiterate that this handset retails for P2,998 only. For this amount, DTC managed to include a decent display.  It has a resolution of 320X480 but it’s not terrible when it comes to pixel density.  It still manages to deliver fairly sharp photos, videos and what have you, although admittedly, you can see the pixels on the screen when you look close enough.  In terms of color and brightness, you won’t be disappointed with the Astroid Plus.  However, the display angles leaves much to be desired, especially when you are looking at the screen at an angle while you are in broad daylight.   Again, you need to consider the price of the handset and for its price, the display is quite good.

Now, on to the performance of the phone.  The DTC GT5 Astroid Plus is not a beast of a device.  It sits at the lower end of the Android spectrum.  However, it’s not the worst Android phone you can get just because it’s cheap.  The Astroid Plus is still sufficiently fast.   This phone delivers the kind of performance that you might expect for the price, and then a bit more.  It’s not all smooth though as the transitions for instance are not buttery-smooth and the phone also does not load apps that fast.   Bottom line is, the Astroid Plus is not too fast considering the quite limited specs, yet it’s performance is not frustrating.  It does tasks effectively, and that’s all that matters if you want an Android phone and you’re on a tight budget.  The phone can run popular games like Angry Birds and Fruit Ninja.  That’s about the only games you’d want to play anyway so it’s good that the phone handles them well enough.

What’s worth pointing out is that the phone’s speaker is not that great.  It lacks bass and definition but it’s loud enough so it shouldn’t be a big deal if you’re not that finicky about sound quality. 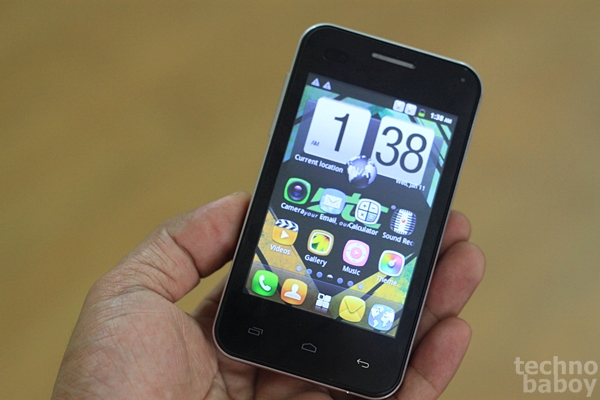 The Astroid Plus runs Android 2.3.6 Gingerbread, the last version that was officially released before the Ice Cream Sandwich came.  A lot of people were happy with Gingerbread then, so that should prove that the OS is not be a real issue if all you want is a phone that runs Android.  DTC implemented some customization but it’s not that heavy nor is it that intrusive.  The screen lock is nice and it’s quite similar to the “slide to unlock” feature of the iOS.  The home screens also use a nice cube transition although honestly this seems to slow down the phone.  The phone has a set of pre-installed themes that you can use if you want to change the icons and other components.  There’s even one theme choice that uses square icons that are similar to Samsung’s icons.

How about the camera, you might ask?  The Astroid Plus has a 2-megapixel camera that performs okay.  I say “okay” because it’s capable of shooting fairly sharp photos with quite good colors, yet it’s not consistent.   Here are sample photos taken with just the right amount of light and without any bright source of light in the frame. The photos turned out usable, although it’s obvious that the camera’s software does some automatic enhancements.

The Astroid Plus’ camera does not handle bright light that well so when your frame includes the sky, for instance, the shot will become overexposed.   Here are sample photos that demonstrates how bad the camera is in handling bright light.   The photo on the right is clearly unusable.  That’s a serious limitation, but for a cheap phone, you wouldn’t expect a spectacular camera, would you?

The DTC GT5 Astroid Plus is quite a hard sell since this Gingerbread-running handset has been released at a time when all new Android phones run Ice Cream Sandwich or even Jelly Bean.  However, for the budget conscious crowd and for those who just want to try out Android, this phone is not a bad choice at all.  For the very low price of P2,998, it’s quite capable of delivering a satisfying Android experience.  It’s not the best, yet for the price, it’s still compelling.   The standout features of the Astroid Plus are the build and the screen.  The rest may be deal breakers for some and still acceptable to others.  The low 512MB internal memory and the 256MB RAM, for instance, cannot simply be ignored.  But the reality is that the Astroid Plus is still able to deliver an acceptable performance and for some, that’s all they need to know.

The Astroid Plus does not intend to wow Android fans, it merely gives them the chance to own a decent Android handset at a very low price.  This it was able to achieve.