Starmobile recently launched a slew of Android devices which includes the Crystal handset.  Its latest offering in the tablet department is the Engage 7HD.  The new tablet is priced at P7,990, which is very affordable considering the specs offered.  Despite the cheap price, the Engage 7HD looks nice.  The brushed aluminum finish gives the tablet a premium look, belying its low price.

The Google Nexus 7 is always a good option when it comes to 7-inch tablets since the $199 tablet is powered by a quad-core CPU but in the Philippines, a Nexus 7 costs anywhere from P13,000 to P15,000.  That means that in terms of price in the Philippines, the Nexus 7 is not a real alternative to the Engage 7HD.  Moreover, the Starmobile Engage 7HD offers connectivity options not found in the Nexus 7. 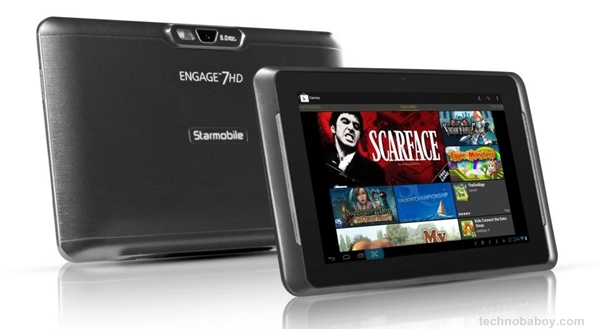 The most impressive feature of the Starmobile Engage 7HD is its 7-inch HD display which, at 1280×800 pixels, should deliver sharp and crisp photos, videos and what have you.  The HD display is also of the IPS (in plane switching) type which means it has a wider and better viewing angle compared to non-IPS displays.

The other specs of the Engage 7HD include a 1.2GHz Dual-core Processor, 1GB of RAM, 8GB internal storage (expandable up to 32GB via microSD), 8-megapixel rear camera with flash and 0.3-megapixel front camera.  The battery is 4000mAh that’s said to be capable of 5 hours of video playback and 400 hours of standby time.  The other cool thing about the Engage 7HD is it is compatible with 3.5G modems through its USB on-the-go cable.  What this tablet lacks is Bluetooth connectivity.  Hence, you can’t transfer files via Bluetooth or even connect Bluetooth devices.