The brand AOC reminds me of the once-ubiquitous CRT monitors.  That’s where you probably saw the letters AOC on any tech-related device.  Now the brand is still into monitors but they’re the LCD type, and if I’m not mistaken AOC has all-in-one desktop units as well.  The brand recently went into the distribution of Android tablets, and that’s a very welcome development as you will learn from this review of one of its current tablets, the AOC Breeze MW0731+.  This tablet runs Android Jelly Bean and if you want to know how much it costs, it retails for only P5,999.

This is the first ever tablet from AOC that I have ever used, so at first I didn’t know what to expect.  I thought I was going to get something similar to the cheap-feeling tablets that have flooded the market of late.  Opening the box was the first of many pleasant surprises I got with the AOC Breeze MW0731+.  I was greeted by a premium-looking tablet. 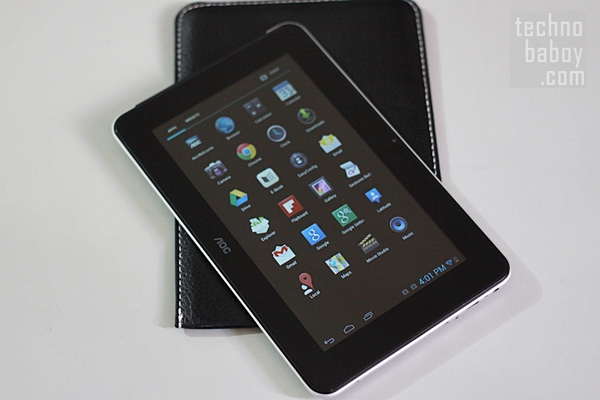 The AOC Breeze MW0731+ is a slim tablet and is even a hair slimmer than the Nexus 7, or at least that’s how it feels on the hand.  It has bit of a heft to it, which is the way I like tablets, and which also adds to the impression that it’s an expensive tablet.  It has a sturdy construction and the screws on the ends of the tablet reinforce that notion.  What’s more, it also has a leather carrying pouch, so you definitely feel that you’re getting more than what you pay for.

The AOC Breeze MW0731+ has a brushed metal finish, much like the finish that you see on Apple’s iPad tablets.  The bezel is all black but the back and the sides are mainly silver.  Turning the tablet over, you’ll see a black rubbery plate on one end, something that somehow reminds me of the Huawei Mediapad.   The other end hosts the speaker grille. 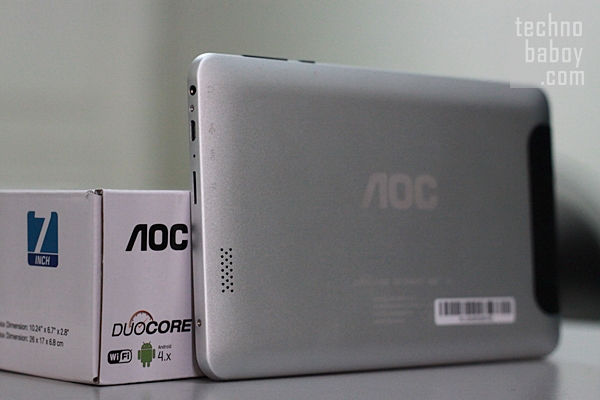 In terms of ports and buttons, there’s only a few of them on this tablet.  On the top of the tablet are the power button and the volume rocker while on the side you see a micro USB port flanked by a 3.5mm headphone jack and a microSD card slot.   You may plug in USB devices on the AOC Breeze MW0731+ through a USB OTG port that comes with the tablet. 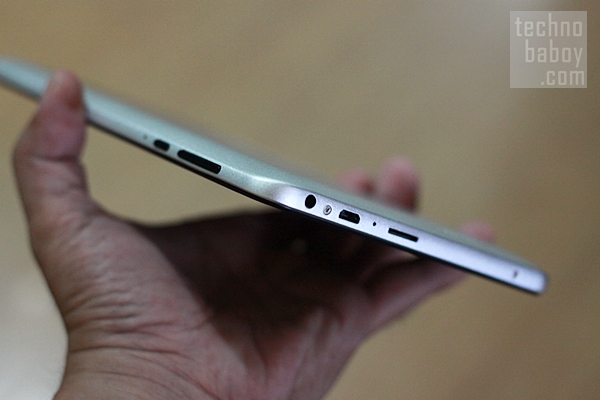 The AOC Breeze MW0731+ has a 7-inch display with 1024×600 pixel resolution, which makes it just slightly inferior than the 1280×800 resolution on the more expensive Nexus 7.   In terms of use, the display on the AOC Breeze MW0731+ is just as stunning as the one on the Nexus 7.   There’s hardly any difference in actual use.   This is another surprise for me since I was not expecting a good display on a sub-P6,000 tablet.  The display is crisp and the colors pop and it has a really good viewing angle. 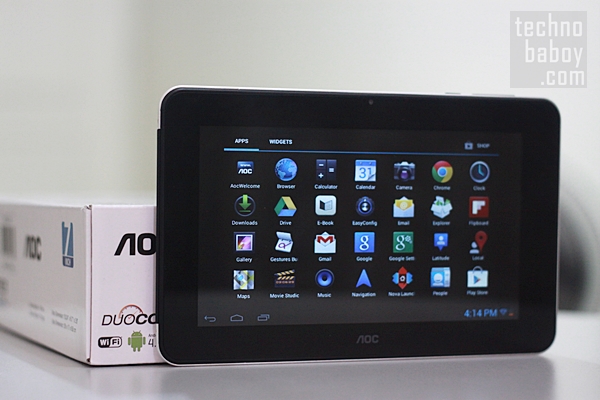 The AOC Breeze MW0731+ is quite a compelling device when the hardware specs are taken into account.   Apart from the nice-looking display, it has a 1.4GHz ARM Cortex A9 dual-core processor, a quad-core GPU and 1GB of RAM.  There’s Wi-Fi and Bluetooth, of course, and if you want to plug in your 3G dongle you can do so through the tablet’s OTG port.  The tablet has a front-facing camera for video calls, albeit it’s only the 0.3 megapixel VGA type.   The internal memory is only 8GB but you can have it expanded through the tablet’s microSD card slot which accommodates up to 32GB of extra storage.  Overall, the AOC Breeze MW0731+ is a solid piece of hardware, and the fact that it is priced at P5,999 makes it all the more attractive.

This is another area where the AOC Breeze MW0731+ has surprised me.  Cheap tablets have disappointed me in the past and I wasn’t really expecting a fast-performing tablet with the AOC Breeze MW0731+.  Needless to say, the tablet was surprisingly fast I had to check if I was really using the right tablet.   Navigation on the Jelly bean-running device was a breeze it was like I was using an expensive Android tablet.   Animations were smooth and apps loaded fast.  If you’re a tablet user, you know that performance matters and if you marry that with a cheap price tag, you immediately have a winner in your hands.

Games played nicely on the AOC Breeze MW0731+ and multi-tasking was also a pleasant experience.  Memory-intensive games ran well, which is quite a feat for a tablet this cheap.  The G-sensor and accelerometer also performed well, unlike other cheap tablets in the market. 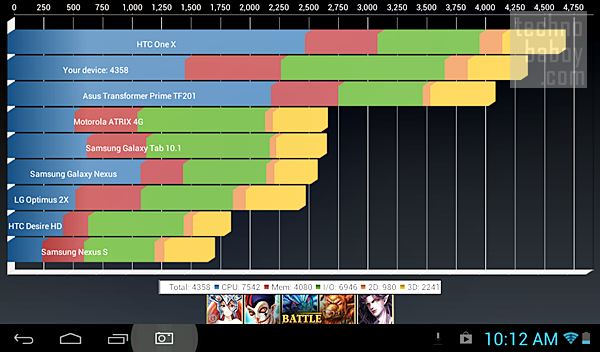 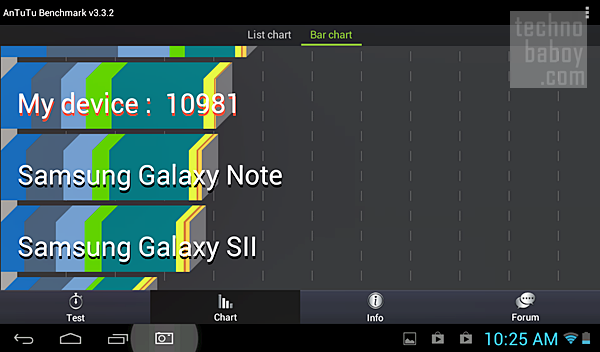 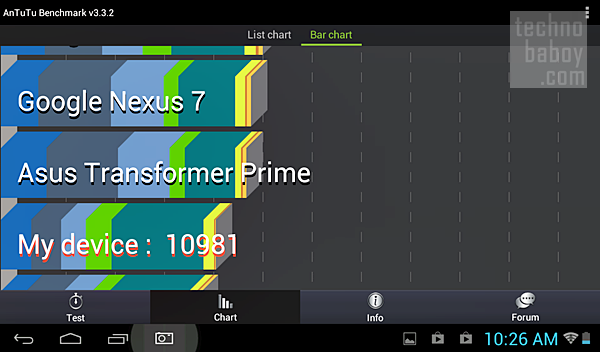 Battery life on the AOC Breeze MW0731+ is also good.  I was able to get more than 12 hours on a single charge under normal use, with the Wi-Fi on most of the time.

The AOC Breeze MW0731+ is very compelling device.  It is a perfect combination of good design, great performance, and attractive price.  If you are looking for a sub-P6,000 Android tablet, look no further.  The AOC Breeze MW0731+ has decent hardware specs overall but on the things that really matter, the tablet delivers and delivers well.  It has a really nice display, a solid construction, and a surprisingly fast performance.  I never thought I’d see all these in a tablet that’s priced as cheap as this.  You know my verdict on the AOC Breeze MW0731+, it’s just a question of whether you have the budget to buy it. 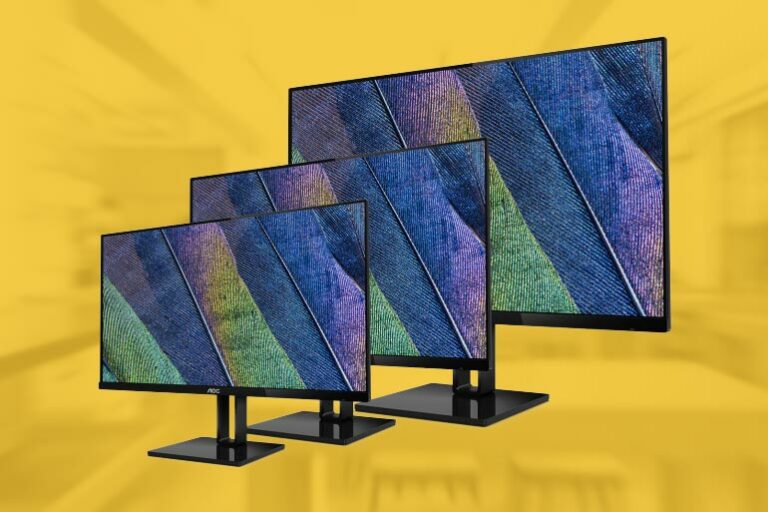