The rumors are once again on the money.  LG just made the G2 smartphone official.  It is the Korean company’s latest flagship and it’s supposed to be its answer to all great smartphones like the Samsung Galaxy S4, HTC One or even the iPhone 5.  Is it any better than these flagship phones?  In some respects, yes.   Here are the main hardware specs of the LG G2.

On paper these are great specs.  The display is huge but thankfully it’s a full HD 1080p display.  The processor is one of the most notable features since it’s a fast 2.26GHz quad-core Snapdragon 800 processor paired with 2GB of RAM.  You should expect nothing but smooth and fast operation from the LG G2.  The battery also looks good at 3,000mAh and the camera is also quite compelling at 13 megapixels. 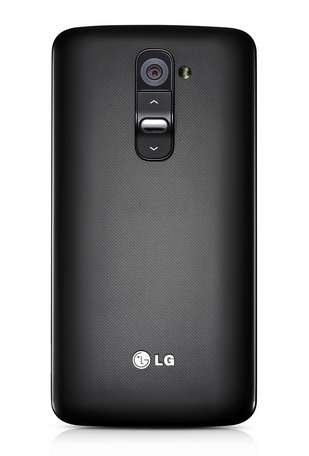 In terms of design, the LG G2 should please a lot of Android fans.  Its screen is almost edge to edge and I know a lot of users like this.  The most notable feature of the LG G2, design-wise, is the location of the volume rocker and the power button.  They are usually located on the side of smartphones but on the LG G2, they are at the back, just below the camera lens.  According to LG, this is easier to use since the phone is huge.  Users apparently have a hard time using volume rockers and power buttons that are on the side of big phones.  I doubt if the user experience is improved by moving the buttons to the back of the phone.

Details for pricing and availability of the LG G2 have not been announced yet.