Some people find 5-inch devices just too big for daily use.  Top Android handsets measure anywhere from 4.7 inches to about 5.5 inches while smaller variants do not carry top notch specs.  Which is why for those who need good specs in a smaller platform, the iPhone 5 is the only natural option.  Devices like the Samsung Galaxy S4 Mini or the HTC One Mini will bridge this apparent demand but these handsets carry lower specs compared to their bigger variants.  I have yet to see a 4-inch or 4.3-inch smartphone that doesn’t feel limited in one sense or another.

Sony is working on a small smartphone and I hope it has great specs just like the Xperia Z.  Leaks point to a device that could be the Xperia Z1 Mini, or the Honami Mini.  A user on XDA Developers posted a photo of a Sony handset beside a BlackBerry Q10.  From the dimensions of the handset, the display could be 4 or 4.3 inches, which would put it at about the size of the Xperia Ray.  Rumors say this could be the Xperia Z1 Mini, or Honami Mini, featuring a 720p resolution display and packing a Snapdragon 800 chipset, a 20.7-megapixel camera and a 2,400mAh battery.

Here’s the photo of the rumored Xperia Z1 Mini. 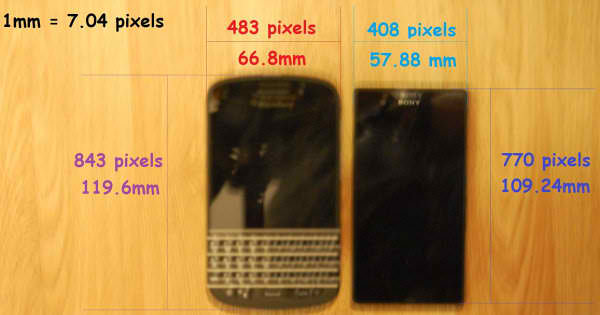 If these rumors turn out to be true, the Xperia Z1 Mini could be Android’s answer to the iPhone 5 in the 4-inch realm, that is.  We might see the Xperia Z1 Mini on September 4, which is also the rumored launch date of the bigger Xperia Z1.