The release of iOS 7 met some complaints and foremost of those complaints relate to security issues.  For instance, users were able to discover that iOS 7 on the iPhone has a security hole that allows others to access photos and make calls even from the lock screen.  Some other bugs were discovered but this is typical of every major iOS update.  When iOS 6 was released for instance, Apple also issued an update just a few days after the OS was released.

Just today, Apple released iOS 7.0.2, its first update to the OS since it was made available publicly on September 18. 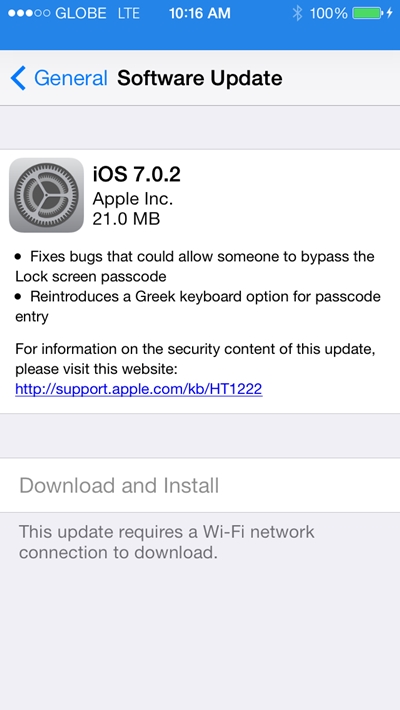 With the release of iOS 7.0.2, Apple has patched the major security flaws on iOS 7, including of course those that were brought about by the lock screen.  The iOS 7.0.2 software update also reintroduced a Greek keyboard for passcode entry.  If you want to know about the details of the fix, go here here.  The file size for the update is only 21MB.

To download the iOS 7.0.2 update, check your device first.  Go to Settings, then General, then Software Update.  You will need a Wi-Fi connection if you will update OTA.  I suggest you get the update using iTunes so you can backup your data before starting the update.

If you have already updated to iOS 7.0.2, share your experience below.