The Xiaomi Mi 8’s specs makes it online via leaked images of its retail box and product poster. Leak also suggests the phone will have its own animoji.

With the Xiaomi Mi 8 set to launch on May 31, 2018, various leaks has surfaced showing partial specs and a new animoji feature.

According to the leaks, the phone will come with a Qualcomm Snapdragon 845 processor with 6GB RAM and 64GB of storage. The front camera was revealed to have a 20MP sensor and it is said to come with 3D infrared facial recognition technology, similar to the one found on the iPhone X. Despite facial unlock, the phone still retains a fingerprint sensor at the back.

The IR tech also gives the Mi 8 animoji powers again like the iPhone X. A sample video was posted by Twitter leaker @bang_gogo_, showing a couple of cute animals and Xiaomi’s mascot singing a tune.

The image also revealed the Mi 8’s dual cameras and a wide display notch. It is expected to be the same (or better) than the ones on the Xiaomi Mi MIX 2S. Recently, the company formed a new in-house camera division. Because of this, it is widely expected that their new smartphones will kick ass when it comes to photography. 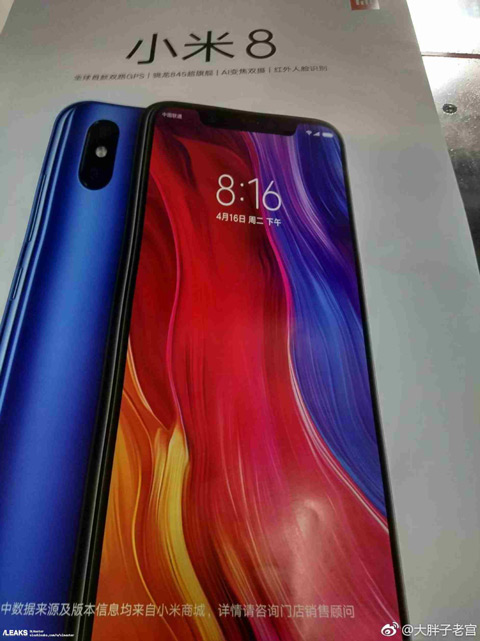 Lastly, the leak also mentions the phone to be the first handset to have dual GPS. I’m sure they have a good reason for this. Although I’m at a loss as to how much better this is than the regular ones.

That’s it for the leaks. Hopefully, all will be revealed when the handset launches on May 31, 2018.