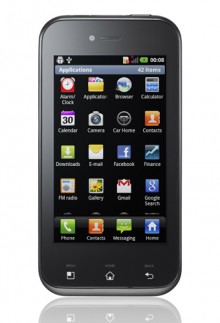 Confirming rumors and sighting reports, LG recently unveiled the LG Sol handset through a press release.  The handset runs Android 2.3 Gingerbread and features a 3.8-inch display using “Ultra AMOLED” that’s reportedly better in terms of showing content in bright and sunny conditions. LG boasts that the Sol will feature a new power management technology called the “Dark UI” which supposedly utilizes less white light when the phone is idle.  This will extend the battery life to about 20 or 30 percent according to LG.  The internals doesn’t really impress. It packs a 1Ghz CPU (appears to be single core) and will have a measly 512MB RAM.  The unit will include a 2GB microSD card though.  The phone will have a 5-megapixel main camera capable of recording VGA resolution video at 24 frames per second. The LG Sol has a thin profile, measuring only 9.8mm thick.

The LG Sol will ship in Europe in mid-September for Europe, with the rest of the world getting the handset afterwards.  Colors available are black, white, and titan.