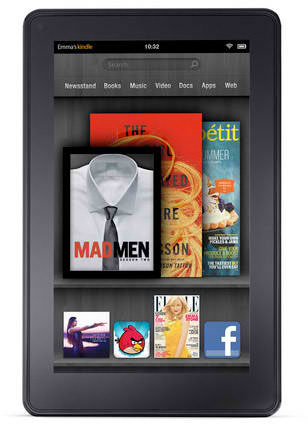 Amazon just unveiled the Kindle Fire tablet, making the rumors official. The Fire is a 7-inch Android tablet that will sell for only $199. That’s a lot cheaper than most Android tablets and way cheaper than Apple’s iPad. But what could have been sacrificed to achieve that price point? Apparently a lot.  The Kindle Fire doesn’t have an embedded camera or a microphone an also doesn’t have 3G, although there’s Wi-Fi connectivity.

The Amazon Fire will use a 7-inch IPS panel, a dual-core CPU and will weighs only 14.6 ounces.  Amazon includes access to the Android Appstore, Kindle books, magazines, and what have you, which are all stored for free via Amazon Cloud Storage.  And the popular Whispersync of the Kindle has been made to work with movies and TV shows.  It comes with a 30-day free trial of Amazon Prime that’s otherwise worth $79-a-year that covers streaming video and free two-day shipping.

As to the OS, Amazon is said to have used a polished Android and has come up with a fresh and easy-to-use interface and tied the Kindle Fire closely to Amazon’s content library of movies, magazines and music.

Amazon is position the Kindle Fire as a competitor of the iPad by using its dominance in e-commerce. Will the tablet be a hit? Only time will tell.