In a world ruled by iPods, some brands are still offering good digital music player alternatives. Sony, which used to be the biggest when it comes to music players, is one such brand. It’s admirable that the company tries to give Apple a fight by coming up with a good range of music players. Sony’s B Series players, the NWZ-B160F series, specialize in bass response. The specific model I reviewed in the series is the NZW-B163F, a player with 4GB capacity.

Sony NZW-B163F has quite a good design, flat on the top and rounded at the bottom. It feels just right when held by the hand. On the face of the player is a 3-line LED display that shows the menu and track details. To the right of the display is a wheel that works as track selector and on its center is the play/pause button. Also shown on the face are the Home, Back and Zap buttons. One side houses the record, volume and bass buttons and the other side has the hold button. The controls are quite intuitive, and the wheel at the center is quite useful.

The earphones of the Sony NZW-B163F take from the old Sony earphones and though it still looks okay, I find it quite boring and honestly, I wanted to see something fresh. The Sony NZW-B163F looks good overall but in terms of quality of materials, it’s not all great. Some parts seem okay but others feel plasticky, especially the scroll wheel.

In terms of features, the Sony NZW-B163F offers a bass enhancer, a detachable clip, power illuminator a Zap button that lets you preview the chorus of the next tracks. It also boasts of 18 hours battery life and a 3-minute quick charge already gets you 90 minutes of playback.

Like most Sony music players, the Sony NZW-B163F performs well sonically. It renders quite good sound but it’s far from being perfect. The stock earphones are quite decent but I would replace them with in-ear monitors or over-the-head cans in a heartbeat.

The Sony NZW-B163F offers a bass enhancer but it doesn’t always work for me. On most tracks I find the bass just too strong and it somehow ruins the listening experience. Needless to say, the details on low frequencies are not well-defined. The mids are just okay but where the sound really fails is in rendering high frequencies which somehow sound distorted and broken especially when you are listening to tracks in high volume. The overall sound on the Sony NZW-B163F is acceptable and could work for some but if for those who have used really good earphones, they’ll know that what Sony offers here won’t be able to compete with the best.

The quick charge feature of the Sony NZW-B163F at least works as advertised. A 3-minute charge gives you about more than an hour of music playback. A full charge takes a little over an hour of charging time. I didn’t quite get the 18 hour playing time promised, however. I was only able to get roughly 12 hours from a fully-charged Sony NZW-B163F.

The Zap feature is something useful. It gives the user a 4-second or 15-second preview of chorus of the next song. It doesn’t always get you the chorus part but most of the time it does. When you’re jogging or are otherwise busy with something and you just want to skip through tracks quickly, the Zap feature is quite handy.

The Sony NZW-B163F is a good, cheaper alternative to the iPod Shuffle especially if you want a display pane, an FM tuner, longer battery life and an easier song transfer system. It also has a good sound quality but admittedly the Shuffle offers better audio quality, not to mention more stylish.

iOS 7 Now Available for Download on iPhone, iPad and iPod 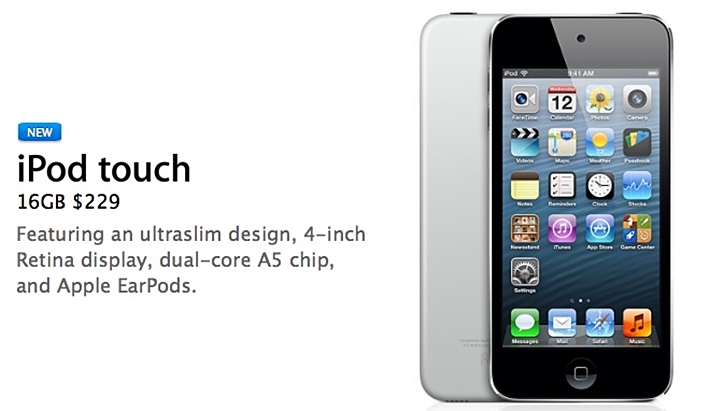 Are these the new Apple earphones for the iPhone 5?